‘What’s more important: trying to sort out a policyholder’s claim or populating an ever-changing spreadsheet?’ 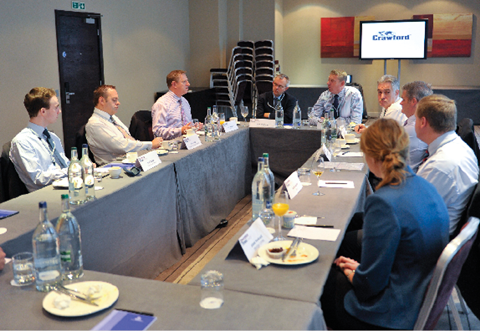 Insurers’ rigidity on pricing and service-level agreements is undermining the capacity of loss adjusters to cope with surge events, Crawford has warned.

The worldwide adjuster’s chief executive for Europe, the Middle East, Africa and Asia Pacific, Ian Muress, told the Global Leaders Forum claims directors’ breakfast - sponsored by his company - that the workload from some clients could increase to 1,000 claims a month, from a base rate of 50, during big disasters.

A strict approach by insurers to maintaining contractual service-level agreements (SLA) could restrict loss adjusters’ ability to respond to such events, Muress said. He added that, in Australia, disaster events can be categorised in a way that enable insurers to relax their SLAs.

“They are quite accustomed to dealing with this kind of feast and famine situation,” he said.

Referring to the volume of claims emerging from last winter’s freeze, Crawford senior vice-president for global markets Clive Nicholls said: “The industry was stretched, and we were stretched horribly as a result. Service then suffers across the whole of the industry.”

He added that the net effect was “potential damage” to the insurance industry’s reputation.

Nicholls said another issue for loss adjusters was the demand for information during a claim. Claims directors, chief executives and analysts all want information, which could interfere with claims being sorted out.

“What’s more important: trying to sort out a policyholder’s claim or attempting to populate an ever-changing spreadsheet to give real-time information?”

The adjusting profession’s capacity to cope with disasters was further inhibited by recently introduced government migration rules, added Nicholls. He said that Crawford moved staff from one country to another to manage peaks and troughs of demand (Insurance Times, 20 October, page 8). Unless these rules were relaxed, he said, adjusters such as Crawford would have to focus resources on select clients.

AXA commercial claims and underwriting director David Williams acknowledged that flaws existed in the current arrangements between adjusters and insurers for dealing with surges.

“There are failings on the loss adjusting and other service provider sides for signing up to these deals,” he said. “But there are also failings on our part, particularly our procurement colleagues, for focusing on the price and not recognising that we get some good value from loss adjusters.

“People need to realise that if we want decent contingency, we are going to have to pay for it.”

Brit head of UK claims Stephen Roberts observed that insurers tended to avoid collaborative responses to surge events for the sake of their brands, even if they wanted to take such an approach.

“I believe we need to find a collectivist approach, but a brand segregation in the way that it’s actually delivered. That may be something we can propose to the quality end of the loss-adjusting market,” he said.

Roberts added that there was a need for clearer definitions of what loss events are and how to respond to them.

He said: “Service - what the client actually demands and the distribution needed to achieve it - is what we should be selling. We have really got so far away from selling a service, despite the fact that we keep coming up to the plate when we’re losing money.”

Insurers should alter their marketing to stop customers constantly searching for the lowest premium, he said.

● What scope exists for insurers to collaborate on handling surge events? How protective are insurers about their brands in these situations?
● What will happen if loss adjusters cannot respond to the next surge event?
● What are the consequences of insurers relaxing the terms of their service level agreements to help loss adjusters respond?