Google is a 'real threat' to the insurance industry

But insurers still have the upper hand regarding industry expertise 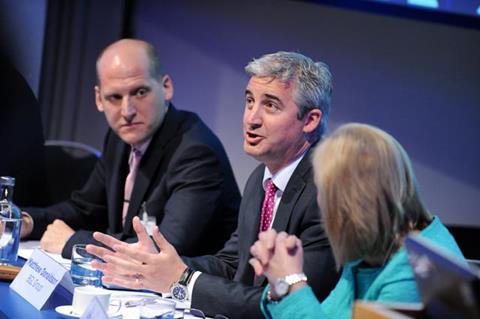 Insurers need to be aware of the threat from Google and other non-industry players, according to speakers at The Digital Insurer.

Panellists taking part in the insurer leaders’ debate told delegates that with low barriers to entry for the internet search giant, it presented a risk to traditional insurers that should not be ignored.

BGL Group chief executive Matthew Donaldson said: “The barriers for entry for Google are pretty small. They’ve got the resources, the digital capability and are far more able to analyse the data at pace than insurers.

“If you look at insurers wrestling with their culture, organisational design and ability to change at pace, all of those things are something some of the potential new entrants could have.”

In a live poll at the event, 75% of respondents said that the next major innovation would come from the likes of Google and other innovators (see chart, below). But UK General group chief executive Peter Hubbard said insurers could respond by better managing the communities they sell to.

“The area we will be challenged over is the definition of community,” he said. “We’ve been dealing with the mass market for a long time. We think we use big data to refine what the mass market looks like, but the consequence is we still end up selling the products the same way.

“In 20 years time we will see community-based selling around whatever community you happen to feel you are in. Those customers won’t just look at the product and the price, but how they access it and what the services are like.”

“The biggest challenge we have is how we manage communities going forward, and digital is one way of achieving that,” he added.

But not all panellists were as concerned by the apparent threat from Google.

“There is a threat to all parts of the distribution chain,” she said. “But is Google as interested in financial services as it is in other subjects? That’s not just to be complacent. There are low barriers of entry and they could do it, but will they do it?”

We are in danger of believing the buzzword and ignoring hundreds of years of insurance history.”

Ageas UK chief executive Andy Watson said that despite the digital strength of the likes of Google, insurers still had the upper hand when it came to industry expertise.

“We are in danger of believing the buzzword and ignoring hundreds of years of insurance history,” he said. “Insurers are very good at what they do: underwriting, pricing and claims. You can be as digital as you want, but if you are one of the 6,000 people whos homes flooded earlier this year, someone has to turn up with a drier to sort it out. You aren’t going to do that digitally.

“There are skills that insurers can do that we seem to have been dismissing. That said there is no doubt we can learn from the likes of Google in terms of handling data and building relationships with customers. There is no doubt they are some way ahead of insurers in doing that. Yes, there are things to learn, but let’s put it in perspective. Claims, underwriting and pricing are core skill sets of insurers, and on the whole we’ve been doing it well for quite some time.”

“Digital can help that, but it’s not going to replace it,” he added.