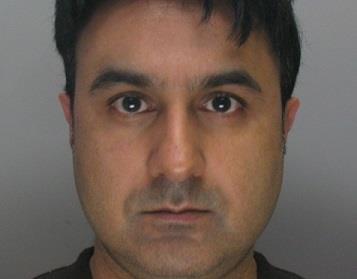 The Old Bailey has ordered £658,461 to be confiscated from a jailed ghost broker who conned 600 people into buying fake car insurance.

Danyal Buckharee (pictured), 44, must repay the confiscated amount as compensation to his victims within six months or face five more years behind bars.

The order came yesterday after the City of London Police’s Insurance Fraud Enforcement Department (IFED) applied to the court to recover the profits of his crimes in 2013. An IFED investigation led to Buckharee being sentenced in October 2013 to three years in jail.

This was on top of four-and-a-half years given for a separate fraud investigated by the Metropolitan Police Service.

In February 2013 Buckharee admitted two counts of fraud relating to the Aston Midshires Insurance and First Car Direct Insurance websites and three counts of money laundering in relation to the four websites during an appearance at the Old Bailey.

“He left them unwittingly on the roads without valid cover, exposing them to massive risks including having to pick up the bill for any damage or injuries they caused in a crash, getting their vehicle seized by police, fines, penalties and a criminal record.

“The court confiscating hundreds of thousands of pounds from Buckharee shows committing insurance fraud ultimately does not pay.

“This is also further evidence of how the Insurance Fraud Enforcement Department is working on behalf of innocent motorists to put fraudsters behind bars and then take the assets gained through their criminality.”