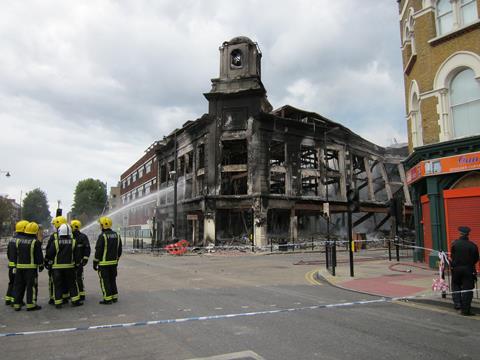 The insurance industry has been praised for its response to the 2011 UK rioting in a government-backed report into the issue by the Riots Communities and Victims Panel.

The report, After the Riots, released this week, also recommends that the Riot (Damages) Act 1886 should be widened to include cover for loss of motor vehicles, clarified as to whether business interruption losses are covered under the act, and improved generally.

The act says that police authorities are responsible for preventing rioting and for paying claims to the uninsured and underinsured who suffer property damage from rioting. It also lets insurers claim back money from police authorities for the riot claims paid to their policyholders, but the current wording caused wide confusion about the scope of the compensation.

The report will help restore the public perception of the insurance industry, which came in for criticism after the rioting.

Last December the panel published an interim report that criticised insurers for being slow to compensate riot victims and for sidelining claims by smaller businesses in favour of larger firms.

Since then the ABI has met twice with Baroness Sherlock, who sits on the panel, and provided an extensive briefing to the panel.

AXA Commercial’s head of underwriting and claims, David Williams, has meanwhile called for an update to the Riot Act, as well as a complete review of the claims process.

“I would like to see modern language, clarity as to what [the act] covers, and a full review of the process in terms of how claims are going to be dealt with, so that they can be handled much more efficiently if it happens again.”

At the time the interim report was released, Tottenham MP David Lammy called insurers “woeful” for their response.

But the latest report said that the “vast majority” of riot claims handled by insurers had been settled or had interim payments made.

The report criticised the claims response of police authorities, however. “It is now almost eight months after the August riots and there are still small businesses that have yet to receive a penny in compensation for the losses they have experienced.

“This is threatening the viability of some businesses and still needs to be addressed urgently. We would again urge police authorities and the Home Office to ensure that all
outstanding claims are urgently dealt with and legitimate claims paid without further delay.”

The Metropolitan Police Service was singled out for criticism in the report, which said that the force had only settled 396 of the 2,538 claims lodged by insurers by the time of publication.

Police authorities have only settled half of all valid uninsured claims in this time, the report said, with only 181 out of 342 claims being settled in London.

The report also suggested that the Riot Act should be rewritten. The Home Office is carrying out an internal review of how the act works, but the panel urged the government to carry out a public consultation to let communities and victims have their say on the new wording.

The suggestion that the act wording should clear up whether business interruption is covered will come as a relief to insurers. At the moment, the act is clear that insurers can claim back property claims from police authorities, but does not shed light on business interruption.

An ABI spokesman said the trade body supported the Riot Act in principle, but had not commented on proposed changes by the time Insurance Times went to press.

● The After the Riots report also recommends that the government should help troubled families; that schools should help pupils build character; and the government and public services should fund a scheme to provide jobs for unemployed youth. Will this be enough to stop future rioting during times of civil unrest?
● Why have police authorities been so slow to compensate insurers?