The political key players you need to know about 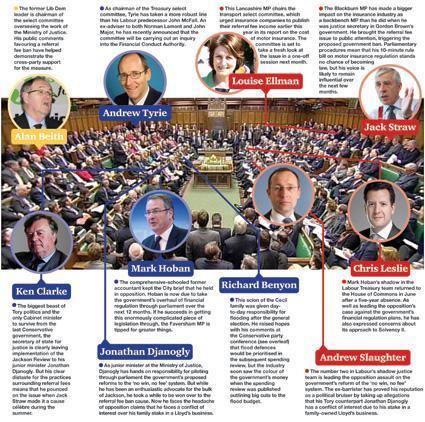 The former Lib Dem leader is chairman of the select committee overseeing the work of the Ministry of Justice. His public comments favouring a referral fee ban have helped demonstrate the cross-party support for the measure.

This scion of the Cecil family was given day-to-day responsibility for flooding after the general election. He raised hopes with his comments at the Conservative party conference (see overleaf) that flood defences would be prioritised in the subsequent spending review, but the industry soon saw the colour of the government’s money when the spending review was published outlining big cuts to the flood budget.

The biggest beast of Tory politics and the only Cabinet minister to survive from the last Conservative government, the secretary of state for justice is clearly leaving implementation of the Jackson Review to his junior minister Jonathan Djanogly. But his clear distaste for the practices surrounding referral fees means that he pounced on the issue when Jack Straw made it a cause célèbre during the summer.

As junior minister at the Ministry of Justice, Djanogly has hands on responsibility for piloting through parliament the government’s proposed reforms to the ‘no win, no fee’ system. But while he has been an enthusiastic advocate for the bulk of Jackson, he took a while to be won over to the referral fee ban cause. Now he faces the headache of opposition claims that he faces a conflict of interest over his family stake in a Lloyd’s business.

This Lancashire MP chairs the transport select committee, which urged insurance companies to publish their referral fee income earlier this year in its report on the cost of motor insurance. The committee is set to take a fresh look at the issue in a one-off session next month.

The comprehensive-schooled former accountant kept the City brief that he held in opposition. Hoban is now due to take the government’s overhaul of financial regulation through parliament over the next 12 months. If he succeeds in getting this enormously complicated piece of legislation through, the Faversham MP is tipped for greater things.

Mark Hoban’s shadow in the Labour Treasury team returned to the House of Commons in June after a five-year absence. As well as leading the opposition’s case against the government’s financial regulation plans, he has also expressed concerns about its approach to Solvency II.

The number two in Labour’s shadow justice team is leading the opposition assault on the government’s reform of the ‘no win, no fee’ system. The ex-barrister has proved his reputation as a political bruiser by taking up allegations that his Tory counterpart Jonathan Djanogly has a conflict of interest due to his stake in a family-owned Lloyd’s business.

The Blackburn MP has made a bigger impact on the insurance industry as a backbench MP than he did when he was justice secretary in Gordon Brown’s government. He brought the referral fee issue to public attention, triggering the proposed government ban. Parliamentary procedures mean that his 10-minute rule bill on motor insurance regulation stands no chance of becoming law, but his voice is likely to remain influential over the next few months.

As chairman of the Treasury select committee, Tyrie has taken a more robust line than his Labour predecessor John McFall. An ex-adviser to both Norman Lamont and John Major, he has recently announced that the committee will be carrying out an inquiry into the Financial Conduct Authority.