Reinsurance broker detected a shift to proportional reinsurance at 1 January 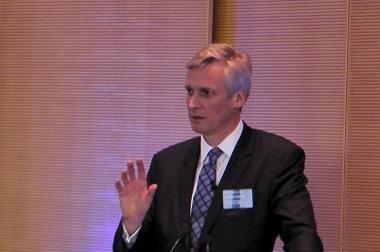 Solvency II, which came into force on 1 January, will change how European insurers buy reinsurance, according to Guy Carpenter.

Guy Carpenter head of EMEA business intelligence Richard Hewitt (pictured) said: “During this renewal there was more evidence that Solvency II was influencing buying strategies, in particular in the Nordic region and central and eastern Europe.

“We also saw evidence of this in the UK and some other markets. In some cases more coverage was bought and in other cases Guy Carpenter arranged structured deals for SCR relief.”

There was also a shift towards proportional reinsurance from excess-of-loss reinsurance in some cases.

With proportional reinsurance, also known as pro-rata or quota share, reinsurers pay an agreed percentage of all claims incurred by the insurer. With excess-of-loss reinsurance, reinsurers only start to pay after the insurer’s claims from a particular event or line reach a certain level.

Guy Carpenter EMEA operations chief executive Nick Frankland said that under the standard Solvency II capital model, which insurers use if they have not had their own internal capital model approved for Solvency II use, insurers do not get as much benefit for having excess-of-loss cover as they do for proportional.

He said: “Quota share buying has increased. I wouldn’t say as yet that excess of loss has reduced, but there is a potential for a slight shift in  balance between pro-rata and excess-of-loss depending on whether you are subject to the standard formula.”

Guy Carpenter predicted that Solvency II will continue to influence buying as market participants and regulators get settled into the new regime.

Frankland said: “We think we are moving to a stage where clients’ reinsurance buying decisions are going to be more informed by solvency and capital requirements than they ever have been. That brings with it the possibility of some conflict with the historical reasons for buying reinsurance, which were really about risk management, profit and retention management.”

Hewitt added: “Analysing the impact of reinsurance on the SCR and using diagnostic tools will become a key driver of buyer demand in future.”