From share price and surplus cash woes to fears that another recession will hit household policies and ruin staff focus, how will the crisis hit your UK business? 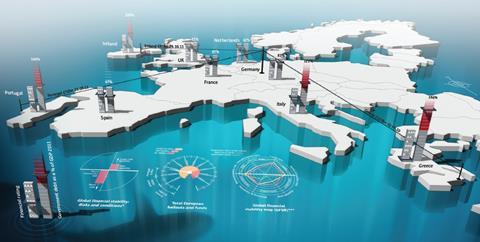 1 Insurers have not been immune to the hit on the FTSE since the eurozone crisis escalated once again in mid-summer. While the crisis is not solely to blame for every insurance stock’s fall, recent events mean that regaining ground is unlikely while equity markets remain spooked. A pair of examples: Aviva was trading at more than £4 for nearly the entire year until July, but has since hovered closer to £3; RSA spent most of the year at close to 140p, but since August has been stuck at around 110p.

2 UK insurance group fund managers with assets exposed to Europe are finding that they have less cash available for investment. Prudential chief executive Tidjane Thiam said at the insurer’s third-quarter results this week: “Inflows have remained strong, particularly in the UK. We are seeing outflows, however, on M&G’s European funds, reflecting the difficulties within the eurozone.”

3 British groups that have built up significant surplus capital, so that they are comfortably in excess of the regulatory buffers demanded to protect insurers in the event of another financial crisis, are seeing those figures fall closer to minimum requirements. Earlier this month, Aviva chief executive Andrew Moss said that the group had hit “short-term headwinds” after the crisis had suffered a £1.3bn drop in its surplus capital as credit and equities markets fell in response to the eurozone’s struggles.

4 Moss was speaking at Aviva’s third-quarter results, which showed that global sales had fallen 5% in the first three-quarters of 2011 on the same nine months last year. European customers are delaying decisions on renewing or taking on new insurance policies as they wait to see the extent of austerity measures necessary across the continent.

5 Richard Gradidge, analyst at Numis Securities, says that the eurozone crisis will only extend the currently historic low interest rate of 0.5% in the UK. He argues that this will “put pressure” on insurance companies that have guaranteed return products of, say 5%. The insurance companies would then have to take a hit to fund these returns – not too dissimilar to the problems of the guaranteed annuity rates that brought Equitable Life to its knees in 2000.

6 Consumers are also going to increase demand for guaranteed products, argues Gradidge, as they retreat from falling equity prices. This comes at a time when insurers are going to want to provide unit-linked products that minimise their potential losses. Insurers will have to decide whether it is better to lose custom or nail down their risks.

7 Insurers will decrease their exposure to Europe. Already the Lloyd’s of London insurance market has cut the amount of government debt it holds in peripheral EU countries and has even withdrawn money from some of the continent’s banks.

8 Should the latest Greek coalition fail in its austerity measures and eventually be forced to pull out of the euro, or if Italy cannot find a way out of its woes, the eurozone will be plunged into recession. Europe is the UK’s biggest trading partner, so the country would almost certainly be taken down with the continent. Another recession puts even more pressure on household income, and far fewer renewals and new policies will be written.

9 Insurers might spy an opportunity in property investment. A recent report by commercial property agent Lambert Smith Hampton said that, outside of the London and South-east markets, investment is subdued. The availability of debt is scarce and the price of even the little that can be secured is on the up, as banks try to de-risk their businesses in the wake of the crisis. This means that insurers could step in to fill the funding gap.

10 There is a danger, particularly among small insurers and brokers with purely UK coverage, that they will spend too much of their energy mulling over the implications of the eurozone woes instead of getting on with their day jobs. “You can sit around and worry all day or crack on and make money,” says one small broker.