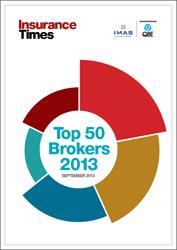 Aon UK has regained its position at the top of this year’s Insurance Times Top 50 Brokers list.

The broker moved up the rankings from third place last year, beating Marsh and JLT Group who complete the top three.

Aon managed to take the top spot despite its brokerage growth increasing by only 3.6% to £726m, which was below the Top 50 average of 5.8%.

Dropping from its number one spot in 2012, Marsh delivered a solid increase in brokerage to £709m, while JLT Group followed closely behind with £670m.

IMAS, which provided the data for the Top 50, chose Hastings, Hyperion and Stackhouse Poland as its top three performers based on strong organic growth and earning before interest, tax, depreciation and amortisation.

Other notable moves in the the ranking include Arthur J Gallagher, which shot up three places this year to 8th after an impressive increase in turnover from £188m to £348m.

BGL Group also climbed one spot to 6th place, while Lockton continues to get closer to the top 10, rising from 18th to 12th spot.

For the full report read the Top 50 Brokers 2012 supplement with this week’s issue of Insurance Times.

Subscribers can view the supplement and full rankings online now by clicking here.