Professional indemnity (PI) has been choppy since the recession hit. Markets have behaved erratically at times, yet premiums have stayed consistently low.

Remarkably, prices are still competitive even in solicitors’ PI, despite a recession-driven spike in claims and losses associated with the Assigned Risks Pool.

Quinn’s bankruptcy ahead of the renewals process in October 2010 left a 10% hole in the market. The gap, plus that created by Catlin’s retrenchment, was soon filled by new capacity.

The resulting low premiums mean that those with legacy business are having to make some fine judgements on whether, and how deep, to stay in.

RSA made a firm decision about what type of solicitors’ PI it wanted to write a year ago, pricing up on inferior risks and holding steady on good risks.

RSA director of mid market Mike Lawton says: “The key to success in PI is to manage the economic situation and decide when to provide capacity, in the right sectors at the right times. Solicitors, architects, accountants, surveyors – we do more when the economy is up, or less, or price up, when things are bad. ProFin is a good sector to make money in.”

Zurich, which has a big chunk of solicitors’ PI on its books, has also become “more discriminating”, says Zurich head of professional and financial lines Stuart Quinlan.

“Our portfolio was not in a good state to make returns a few years ago. The past couple of years have been happier. We used to quote everybody – 7,000-8,000 proposals. We have retrenched and are partnering with brokers who specialise.”

Zurich is focusing new business activity on law firms with 10 or more partners, a sector less likely to result in claims, but is also continuing to renew policies for smaller firms. The insurer has been vocal in trying to drive change in the sector and is keen to bring in more tailored and flexible policies.

In valuers’ and surveyors’ PI, claims have soared since the property bubble burst. House prices tumbled month on month for a year from March 2008, and, as the recession bit, many companies and individuals have defaulted on mortgages. In the first quarter of 2011, 1.5% of all loans had arrears equivalent to 2.5% or more of the outstanding balance – this was the best month by that measure since the third quarter of 2008.

In the north, Bradford & Bingley and Northern Rock are thought to have 40,000 cases of default on their books. Some insurers claim that mortgage lenders are notifying on every default.

Travelers (formerly St Paul) anticipated difficulties and exited the market for property surveyors’ PI in March 2010 and stopped renewals this year. In this sector, prices have sky-rocketed, with some practitioners, particularly smaller outfits, unable to pay the premium and having to shut down.

“It’s dire for them but it isn’t our job to be sympathetic. The property industry caused its own problems,” Manchester Underwriting chief executive Charles Manchester says. “They are uninsurable! There is not a price they can afford to pay.”

The outlook for surveyors’ PI is “troubled”, says Chubb UK and Ireland underwriting manager Nigel Pearson. “We don’t want to overreact [to all the surveyors’ and valuers’ claims]. There may be big claims, rates going up, new players coming in. It’s difficult to get the kind of rates you want and need. The number of notifications is not drying up. We’re in, but not lending a lot of money on it. There is a question as to whether it is still liable as a book of business.”

To view our graph of the D&O and PI market growth compared with UK GDP, click on the image, right.

In directors’ and officers’ (D&O), premiums have been soft for the best part of a decade and remain resolutely so.

Nigel Pearson, UK and Ireland underwriting manager of Chubb, which has a significant D&O book, puts that down to new capacity entering the sector.

“Because there are so many players in the market – new players with no tail, no claims – we don’t see rates going up,” Pearson says. “They are prepared to put out a bit of capacity.”

The sector has between 40 and 50 active underwriters, about 15 of which are primary players, compared with at most 20 overall 15 years ago.

“Brokers go to easy capacity to get programmes placed,” Pearson says. “There was a spike in prices eight years ago, but the market corrects itself and we are always going to have new players come in who believe they can do it more cheaply.”

In financial lines, “a very large US insurer, had it been allowed to go bankrupt, would have changed the market overnight”, he adds. AIG’s bailout has arguably continued to depress prices. 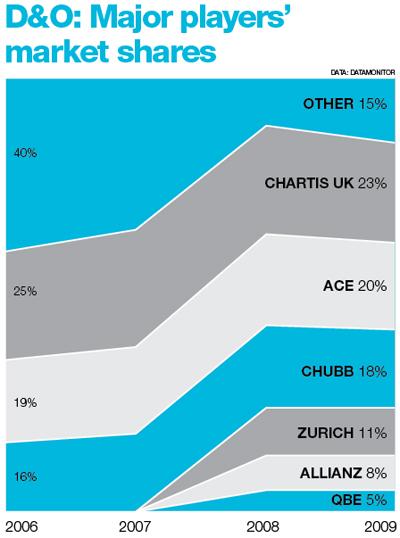 However, there are pockets of hardening appearing in D&O. Take directors of Chinese companies listed on the US Stock Exchange, for example. This is a group among which nearly a half are involved in US class action claims.

In the future, it could be that some parts of the market bear a rate increase, while other parts remain soft.

“Markets are more sophisticated now,” Pearson says. “Private UK SME can be seen in a very different light to US-listed, for example. It’s a different world, and very much more complex. The product lifecycle has changed. It used to be that we’d tweak them a bit, now every two to three years it’s a complete revamp. In D&O, we have dozens of policies.”