UK woman may die in US after insurer refuses payout 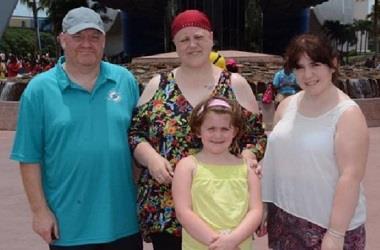 A terminally-ill British woman may die in the US after her insurance company refused to pay for her healthcare, the BBC reported.

Cancer patient Lindsey Gates, 40, broke her leg during a trip to Disneyworld, Florida, with her family (see picture).

Her friends said her insurance company was “well aware” of her condition and she believed she was covered.

The company that turned down her claim, Travel Insurance Facilities, said it had carried out a full investigation, whose findings were “regrettably conclusive”.

The firm said: “We are truly sorry for the unfortunate circumstances - our thoughts are with them all at this difficult time”.

The Hampshire woman was diagnosed with breast cancer in 2010 and has been receiving treatment for secondary tumours since.

Friends and family helped to raise money to send Gates, her husband Jason, and daughters Brooke and Charley, to Florida.

US doctors treating her broken leg also found her cancer had deteriorated further. She has now run up a hospital bill of $131,000 (£101,000). The family hopes to fly Gates home in an air ambulance, which they said will cost a further £65,000.

Friends said the insurer had cited an unrelated medical condition from her past as a reason not to pay out.

A fundraising page has been launched to cover Gates’s bills and the family’s travel costs.