AIG to sponsor the All Blacks 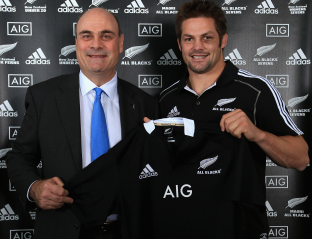 AIG president and chief executive Bob Benmosche said: “Prominently associating the AIG brand with the legendary All Blacks and the highly competitive and successful New Zealand Rugby Union teams, as well as passionate rugby fans around the world, represents a tremendous opportunity for AIG, the NZRU, and rugby.”

AIG’s new logo will be amblazened across the front of the All Blacks’ jersey.

“The AIG sponsorship is a game changer for rugby in New Zealand, and will take New Zealand rugby to new heights around the world,” NZRU chief executive Steve Tew said.

He added: “A new logo on the All Blacks jersey is not a step we have taken lightly – we respect the rich and proud heritage of this extraordinary team, and carefully weighed the change. In the end, the AIG sponsorship is an unprecedented opportunity, and the best option to sustain the future of New Zealand rugby and grow the global game.”