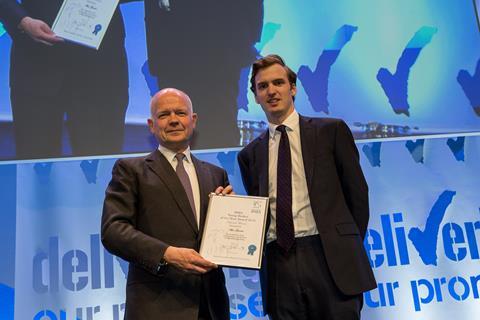 Biba has named Alex Guerin from broker Marsh’s risk management practice as its national Young Broker of the Year.

Alan Clarke of Higos received a highly commended national finalist award and John Steven Newnes of Thomas Carroll was named as a national finalist, which recognises the performance of younger brokers and encourages commitment to the future professionalism of insurance broking.

Guerin won the award for his work, qualifications and CPD record together with his performance at the judging day.

The awards were presented at the Biba 2015 conference by recently retired MP and former foreign secretary William Hague.

Biba chief executive Steve White said: “It is a great pleasure to be able to recognise the stars of insurance broking.

“The winner and those shortlisted represent an important group of our sector who are instrumental in shaping our future. We are also pleased to have Alex involved with Biba as part of our younger broking steering group and website working group. His input has been invaluable.”