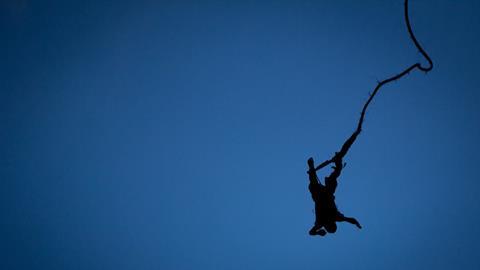 Aviva and the Insurance Fraud Enforcement Department (IFED) have caught out an insurance fraudster who was shown bungee jumping on national TV despite a recent injury claim.

According to Noreen Murray’s claim with Aviva, an accident at work had left her unable to walk or stand for longer than 30 minutes. She had also claimed to suffer from back pain.

Murray used her fake injury to try to claim £19,000 in benefit payments and for loss of earnings and general damages.

Though she claimed to have been injured moving laundry bags in October 2013, Murray did not try to place her claim until February the next year. There was no log of her injury at work and Murray had not told her employer about it.

As if this was not enough to raise suspicions over the bogus claim, Murray was filmed bungee jumping in Valencia 19 days after her alleged injury.

Murray was appearing on Channel 4 reality show Coach Trip when she made the leap, which she described as “the best thing I’ve ever done”.

Aviva declined Murray’s claim and worked with IFED to get a conviction. Murray was given a 10 month custodial sentence, suspended for two years. The judge in the case branded her claim a “foolish enterprise”.

Aviva director of casualty claims Richard Hiscocks commented on the case: “We were already investigating Ms Murray’s claim, but it is pretty rare that the claimant goes out of their way to help us with our investigations by bungee jumping on national TV - just weeks after they were injured. We were able to quickly decline the claim and provide evidence from our investigation to IFED so they could bring a successful prosecution.”

He added, “This claim also highlights the wider cost of insurance fraud – as (Mrs) Murray was also claiming benefits for her alleged injuries and wasting scarce court time on a wholly bogus claim. We are pleased with the outcome, which clearly shows that insurance fraud will not be tolerated and that we will prosecute offenders wherever possible to protect genuine customers.”