Deals round-up: the market may give us reason for cheer

Small deals plummet in Q3, but M&A in the pipeline shows that confidence may be returning

We were seeing some grounds for optimism in the outlook for mergers and acquisitions activity in the insurance sector in the second quarter of this year. After an appalling 2009 – the worst year for M&A in a decade – smaller transactions (under £40m) continued to rally in Q2 2010, with their fourth consecutive quarter of growth for both values and volume.

By contrast, larger deals (greater than £40m) slipped on both measures. That said, their performance for the first half of the year surpassed the whole of 2009.

Were these trends continued in Q3? The answers are revealed in the charts here, based on data compiled by Experian Corpfin and divided into transactions with values above and below £40m. In each case, they include only deals completed in the period where the amount paid has been publicly disclosed and the buyer or seller operates in the UK insurance market.

For smaller transactions, four quarters of growth came to an abrupt end. Of the 15 transactions of all values, only one was disclosed as having a value below £40m: Capita’s £30m acquisition in August of National Dental Plan, a provider of dental health insurance services. That represents an 85% decline in deal volume on the previous quarter, and deal value also dropped, by 65%. This dramatic fall in deals between Q2 and Q3 replicates the trend in 2009, when volumes declined by 80% and values by 40%. 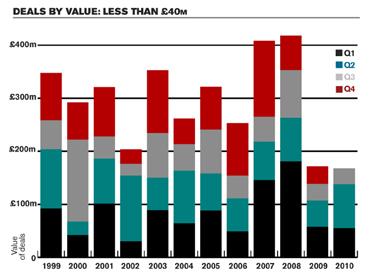 Yet this can’t be explained away as a seasonal effect, as deal volumes actually increased between Q2 and Q3 in five out of the last 10 years. Despite this, ongoing activity and deals recently announced, such as those by Cullum Capital Ventures and Capita’s acquisition of First Assist, suggests that the underlying trend continues to give cause for optimism. 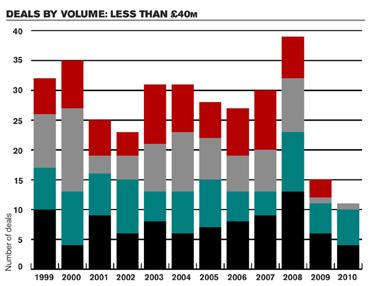 It was a clearer story for deals over £40m. Last quarter, we commented on the black or white nature of the larger deal sector: either a few big transactions happen, or they don’t. In Q2, they didn’t, and we saw a drop against Q1. Fortunately, the picture changed in Q3. With three deals occurring at an aggregate value of £3.1bn, larger deal value in the third quarter alone exceeded that during each of the full years 2008 and 2009. In fact, the total was only £25m short of the volume for those two years combined. 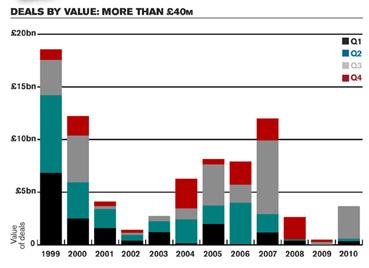 The lion’s share of this activity came from one deal: Resolution’s reverse takeover of the UK life and savings operations of AXA for £2.75bn in September. Kwik-Fit Insurance’s £215m acquisition by Ageas (UK) was the next-largest deal.

So, while smaller deals could be seen as indicating a blip in the M&A recovery, larger deals suggest there is still some confidence in the market and a willingness to invest in large-scale corporate activity. 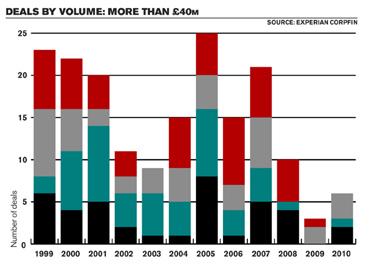 The wider view of buy-outs across all sectors is also a brighter picture. Statistics produced by private equity journal Unquote show increased activity across the wider market in Q3 2010. The aggregate value of larger UK buy-outs (€150m [£131m] or above) was, at €8bn, the fourth-highest quarterly figure since the data series began 12 years ago.

On top of this, the total number of deals so far this year is already more than twice the figure for the whole of 2009. As in the insurance sector, smaller UK buy-outs (up to €150m) were significantly down in Q3 compared with Q2. Overall, however, the moderate performance in smaller buy-outs so far this year has been overshadowed by stronger activity in larger deals.

It looks as if the current trend will continue as a host of large-scale insurance deals are being worked on for Q4 and next year. While Aviva has rebutted RSA, shareholder pressure and a larger offer than £5bn may at least force a vote, and the offer alone shows that the sector’s big players are willing to make large bids.

Similarly, Brit Insurance shareholders have accepted a bid from CVC and Apollo, while LDC is looking to sell Davies, its claims management and loss adjusting firm, for about £60m-£70m.

So, despite the apparent recent downturn in smaller M&A transactions in the insurance sector, the larger players seem to be confident enough to launch some big deals.

The question has to be: can the M&A in the pipeline come to fruition or will something come along to derail the recovery in bigger transactions? We look forward to the fourth quarter with great interest – and increasing optimism. IT