Twenty years at Arthur J Gallagher have given chief executive David Ross a good nose for expansion and diversification. As he tells us, the broker is now looking to the UK retail arena for its next move

“What do I do outside work?” Gallagher International chief executive David Ross is uncharacteristically taken aback as he ponders the question for a few moments. “I think about work,” he replies, tongue in cheek.

It’s not quite the whole truth. With a house in the East Sussex countryside, which he shares with his wife, four children and their three dogs, the 41-year-old is kept busy at the weekends. “I’m master of all I survey from Monday to Friday and then at the weekend I’m at the beck and call of a two and a half-year-old,” he reflects.

But on weekdays, the work ethic that has powered Ross’s meteoric rise within the Arthur J Gallagher empire takes over.

He joined Arthur J Gallagher as a claims broker in 1990 and has been there ever since. Within three years of joining, he was a director of the Chicago-based broker’s heartland North American operations. Ross’s State-side experience is betrayed by the east-coast twang that flavours his native Irish brogue.

In 2005, Ross was appointed to lead Gallagher International, overseeing all of its non-US operations. In doing so, he became the youngest chief executive of a London market company.

At the time, the international operation was a minnow within Gallagher, accounting for just 3% of its total revenues. But while Gallagher has a low profile in the UK – it ranked a modest 18th in the 2010 Insurance Times Brokers Top 50 – the strength of the company’s core US business places it in the global top five.

Ross’s task has been to build up Gallagher’s international profile so that it more closely reflects its US presence. And, as he reveals in this first in-depth interview with Insurance Times, that means expanding into UK retail broking.

But first he wants to talk about what he achieved at Gallagher International six years ago. He describes the firm at the time as a somewhat ramshackle operation. “We knew we had a great brand, but a network of sub-standard offices. People didn’t understand what we were about,” he says. “Gallagher International’s fortunes were fairly misunderstood from the outside looking in – and from the inside too.”

Ross’s first two years were spent overhauling Gallagher International’s internal management. At the same time, he was plotting how the division could branch out from its traditional London market wholesale business into new fields such as risk management, managing general agencies, corporate risks and energy.

While keen to get into high-growth international markets, Ross says he wanted to be there for the right reasons. As an example, he says: “We wanted to be in Western Australia because it was an energy hub for the Asia-Pacific region.”

In the six years since, Ross has quietly been building up Gallagher International through a series of acquisitions in Australia, Brazil, Canada and the Caribbean. The strategy has been part of a wider drive by Gallagher to diversify beyond its US heartland. Ross says no company can “be entirely reliant on the fortunes of one market”. 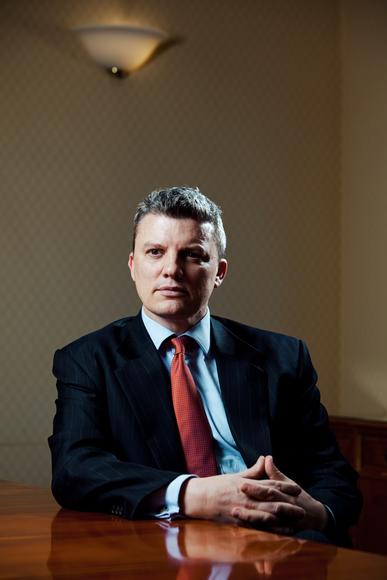 He adds: “Being so US-centric was not that healthy. The plan to create balance by tooling up internationally has been good for Gallagher. It gives a lot more breadth and depth.”

“We didn’t do First City because it was a cheap deal,” he says. “Strategically it made sense and that made it worth pursuing. We did First City because we were incredibly weak in the financial and professional space. We had some very muscular clients but we didn’t have the expertise to talk to them about their D&O and banking.”

Over the past six years, Gallagher International has turned an £8m loss into what Ross predicts will be a near-£35m profit for 2010. “Our compound growth rate has been, quite frankly, sensational,” he boasts. The division now accounts for 15% of the group’s total turnover.

Buying First City was complicated – Ross jokes it took 10 years off his life – but he also sees it as a “game changer” that has given Gallagher’s Chicago headquarters the confidence to equip him with a war chest for acquiring and hiring.

So how is he going to use this cash pile? He rules out a fresh Lloyd’s acquisition. “You are not going to see us acquire another broker in the Lloyd’s market in the next couple of years unless there is a fantastically compelling reason. There are bigger wins for us that make more strategic sense outside of being a wholesaler.”

Moves are afoot to purchase a new MGA business, which Ross says will effectively double the size of Gallagher’s underwriting arm, acquired from Oxygen in 2008.

And Ross is thinking of branching out into virgin territory for Gallagher in the UK: retail broking. “We are intending to move into the retail space. That will be a deal that will move the needle. Strategically it’s one of the most important things we are going to do.”

This move shouldn’t surprise those who know Gallagher’s US business. “Gallagher is a retail brand and the intention is to establish it in the [UK] regions. This is the second-biggest insurance market in the world; we have to be in it,” he says.

For much of his time in charge of Gallagher International, Ross argues, the UK retail broking market has not been that enticing. “Round about 2007/08, the UK market was so overheated in the brokerage space because you had insurers and private equity both driving up multiples to ridiculous levels. So we focused outside the UK.

But unlike three years ago, now is a good time to buy, he says. “While the UK retail market is quite soft, the consolidator buyers are no longer active and nor are the insurers, so the multiples are back at a much more sensible price.

“There are so many brokers in London that are at a crossroads. You would consider now to be a buyer’s rather than a seller’s market.”

Rising regulation costs, poor returns on investment income and the soft market are three reasons firms are going up for sale, he argues. “People who have the money can do fantastic deals. It’s always the way at the bottom of a recession – people who have cash can tool up.”

But Ross insists debt-fuelled growth is not the Gallagher way. “There’s not a huge appetite for borrowing bucketloads. We like to eat what we kill and then feed off the earnings.

“Our ambition is to be better than we are today. If you invest in being better, the numbers will take care of themselves,” he adds.

Ross muses that achieving a more even work/life balance is another goal. But it’s clear that it’s not going to happen quite yet. IT