Market research commissioned by Insurance Times has some sobering messages for the motor insurance industry. But despite public ire over high premiums, the overall results are not as bad as some expected 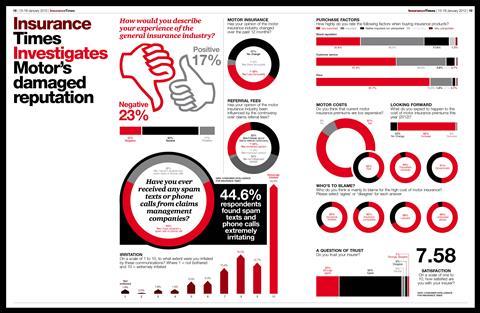 Last year was an ‘annus horribilis’ for the reputation of the general insurance industry, with an un­paralleled level of attention focused on its murkier practices, largely spurred by controversy over the rising cost of motor cover and the August riots.

Click on the pdf link, right, to view the results in full.

And this focus looks unlikely to soften in 2012 - just days into the new year, the government’s Transport Select Committee published its second highly critical report in less than 12 months into the cost of motor insurance.

But what impact have these brickbats had on the industry? To find out, Insurance Times commissioned exclusive market research to test the state of public opinion on the sector. The survey, carried out by market research company Consumer Intelligence, focused on the extent to which the industry’s reputation has been damaged by the furore surrounding the motor market.

On the over-arching question of individuals’ experience of the insurance industry, nearly two-thirds (60%) of the survey’s 1,680 respondents answered that it was neutral.

Consumer Intelligence managing director Ian Hughes urges the industry not to be disheartened by the response.
“People within the industry will take this personally but they tend to forget that we are just one of the things that consumers have to worry about. It’s to be expected that people don’t have strong feelings about insurance.”

Sabre Insurance chair Keith Morris is surprised by this finding. He says: “With the price rises people have seen in motor during 2011, if anything I would have expected people to be somewhat more negative, so it’s heartening to see the proportion of respondents who are neutral or positive about their experience.”

But Hughes believes the relatively narrow gap between positive and negative ratings means that turning around perceptions should not be difficult.

There’s good news too for the industry on the issue of trust, where it scores well. The overwhelming majority agree that they trust their insurance company, with a tiny 3% disagreeing.

But the survey’s findings on motor insurance will be less pleasing for the industry.

Opinion on motor insurance has dimmed over the last 12 month, with 40% having a less favourable opinion compared to 4% with a better view.

Hughes describes this finding as “upsetting and depressing”, putting the figure into context by pointing that 7% of people will generally have benefited from their policies by making a claim.

A-Plan chief executive Carl Shuker is clearly surprised that the balance of opinion on this question is so unfavourable, arguing that it reflects a lack of understanding of the benefits offered by motor insurance.

But AXA Commercial claims and underwriting director David Williams is more struck by the finding that so many consumers’ opinions are unchanged (56%).

“I am surprised that it has not got even worse if you think of the things that have gone on in the last 12 months,” he says.

Bluefin chief executive Stuart Reid describes as “rather dispiriting” the linked finding that 91% of respondents think motor premiums are too expensive. “There’s clearly a job for us to do in helping people see the value in the premiums compared to the size of the claims we have to pay,” he says.

The survey then examines the roots of this widespread public disaffection with motor insurance. The media brouhaha surrounding referral fees does not appear to have resonated as strongly with the public as those within the insurance bubble might have expected.

Williams says that the industry needs to stop shooting itself in the foot. Commenting on the referral fees issue, he says: “We have been directly instrumental in some of the things that have been detrimental to the industry.”

Groupama Insurances personal lines director Kevin Kiernan agrees: “It is obvious that this has eroded trust and it is therefore no surprise that these days even the banking industry enjoys a better reputation. The industry has a lot of work to do to set things right.”

The survey also shows that two-thirds (64%) of respondents said they had received a spam text or phone call from a claims management company. Of those who had received such communications, most were irritated. Nearly half (45%) said they were extremely irritated compared to a tiny 2% who were not bothered.

“I doubted it was quite as prevalent as the proportion this survey actually found,” says Morris.

But the good news for the industry is that the survey respondents identified fraudsters and uninsured drivers as the two chief culprits for escalating motor insurance costs.

Over 90% of those who answered the survey agreed that these two groups were “mainly to blame” for the high cost of motor insurance. In third place, 85% named insurance companies followed by lawyers.

Williams says: “They don’t quite get referral fees, but they understand the impact that fraud and crime are having.”

Morris, who also chairs the ABI’s motor committee, argues that the survey findings show that the industry’s efforts to finger fraudsters and uninsured drivers as the cause of soaring premiums is paying off.

“It’s heartening to see the message getting through that issues such as fraud, uninsured motoring and legal costs are contributing significantly to the rising cost of motor insurance. I would hope that both the industry and the government would take this as a sign of public support for their actions in countering these problems.”

Allianz retail general manager Jon Dye says: “The fact that 94% of people blamed fraudsters for the high cost of motor insurance is a surprising but welcome finding. Fraud at point of application and claim is a huge issue so it is pleasing that consumers recognise its significance.”

Lanson public affairs and regulatory consulting director Richard Hobbs believes the findings show that if the industry can show it is tackling claims costs, it can keep customers on-side. “Motor insurance buyers are pretty rational people and they want to be treated fairly. They get that insurance companies need to be profitable.”

But customers clearly do not want to see their premiums feathering the nests of fraudsters and what Hobbs calls “avaricious lawyers”.

Insurers not off the hook

Meanwhile, ex-justice secretary Jack Straw believes that the findings do not let insurers off the hook.

“It is time the insurers themselves, whom 85% of the public blame for the level of premium, bring their own house in order and curb practices, such as credit hire, which are clearly counter to the public interest.”

But Williams detects a potential silver lining in the survey’s finding that the vast bulk of respondents expect to see motor premiums rise over the next year. If the government’s changes to legal costs start to deliver benefits within the next 12 months, motor insurance customers could start to see the benefits during 2012.

He says: “If everybody is expecting increases, we may have an opportunity to pleasantly surprise people.”