Revealed: Who are the top ethnic minority leaders and role models in 2021?

Several insurance leaders and role models have been named in the latest 2021 Empower ethnic minority lists.

The three Empower lists are backed by Yahoo Finance and they showcase business leaders who are “breaking down barriers at work and working hard to smash the ceiling for ethnic minorities in the UK, Ireland, Europe and people of colour in the United States and Canada”.

Founded in 2017, the Empower lists aim to challenge the lack of ethnic diversity within businesses at executive level, as well as pushing for black, Asian and ethnic minority inclusion at all organisational levels.

The insurance leaders referenced in this year’s Empower lists are detailed below:

This list showcases individuals who have made a significant contribution to ethnic minority inclusion at work.

This list recognises senior executives that are leading by example and removing barriers to success for ethnic minority employees.

This list celebrates those creating a more diverse and inclusive business environment for ethnic minority employees. The list previously featured a top 20, but it has been extended to 50.

Some candidates made it back on to the Empower lists again this year. For example, Ajay Mistry was up a few places at number 32 this year on the Top 100 Future Leaders list following his move to Clear Insurance. On last year’s list, he peaked at number 52 while employed at BHIB Insurance Brokers and Brokerbility. 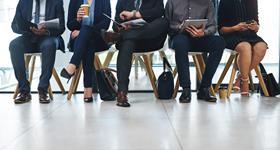 Having recently joined Clear Insurance, Mistry is looking forward to working with its operating board to support people of colour and develop new internal staff networks, utilising his diversity and inclusion knowledge and feeding it into the business.

Outside of his role at Clear Insurance, Mistry sits on the Chartered Insurance Institute’s board for the Society of Insurance Broking and is a part of the shadow board for governing body Inclusion@Lloyd’s.

Likewise with Aon’s Dominic Christian, last year he peaked at number five on the Top 20 Advocates list, which has now been extended to a top 50 list this year, where Christian holds position number 21.

Christian has worked with one of the ethnic minority women that he sponsors at Aon on two initiatives to attract diverse talent. This led to a new two-day workshop called Future Leaders, designed to attract ethnically diverse talent.

In 2020, 38% of Aon’s early careers hires - including graduates, interns and apprentices - were black, Asian or ethnically diverse.

While at Zurich, Maxine Goddard featured as number 62 on last year’s Top 100 Executive Role Models list - this year, she sits at number 41 on the Top 100 Senior Executives list following her move to Sompo International Insurance.