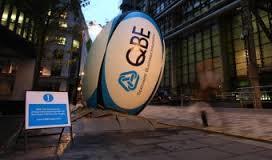 Gross written premium fell from £1,18bn in 2013 to £887.6m last year as it scaled back in aviation and bloodstock. Around 90% of QBE’s international business is written from London.

Ross Curran, analyst for Commonwealth Bank of Australia, told SNL Financial: “Lloyd’s has been fundamental to the group’s growth over the past nearly two decades.

“The current CEO [John Neal] came from that market and knows it extremely well. I think Lloyd’s is too engrained in the group’s DNA for it to exit entirely.”

Curran added that the QBE’s restructuring was largely complete and he expected it to once again grow.

Analysis from SNL Financial shows that Catlin once again was the largest syndicate. Brit Syndicates Ltd was one of the big growers, with premiums jumping 10.17% to £1.3bn.

SNL analysis of Brit’s 2014 full-year presentation attributed this to robust organic growth in U.S. speciality business and the June 2014 takeover of the renewal rights to QBE’s Lloyd’s aviation business.

Being a Lloyd’s member allows a company to leverage the marketplace’s A+ Standard & Poor’s capital rating, even if the company itself holds a lower rating, he told SNL.

“That’s one of the biggest issues for all of the players trying to get in, like Fairfax and some of the Middle East and Asian companies,” said Flanagan. “That capital efficiency is a major draw of Lloyd’s.”

Outside of the Lloyd’s market — particularly in reinsurance — a trend of merging and upsizing is emerging, as companies aim to secure the lion’s share of available business. But within 1 Lime Street, size isn’t everything.

“And if you look at Hiscox Ltd for example, they are even walking away from business,” Flanagan said. In the case of Fairfax and Brit, discussions regarding the benefits of the merger have circled around strategy, not scale, he added.

“A focus on gaining scale is not something which will always go down well with shareholders in a tough environment,” he said.