The IT Pack finale hits the high seas

We bring you this year’s spirited crew and ask: who will sail ahead? 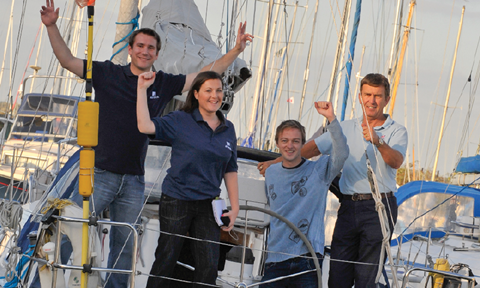 The grand finale of this year’s IT Pack took place far from the safety of terra firma, with our intrepid IT Packers proving their leadership skills and business acumen through a high-adrenaline challenge. They were split into teams on three boats - a metaphor for a joint business - and each team had to work together in highly pressured circumstances to demonstrate their skills.

To get the lowdown of the full IT Pack crew, click on the pdf, right.

That wasn’t all: the intrepid finalists also faced an intense grilling from the IT Pack judges - Insurance Times editor-in-chief Ellen Bennett and Aviva’s head of trading Jodi Grattidge, head of broker key partners Clark Ross and regional broking director Jon Neill - about their careers to date, their ambitions for the future and their understanding of and commitment to the industry.

The interviews were designed to find an individual who was committed to their career and the wider industry, and went above and beyond what would usually be expected at their level. The judges were looking for a broker who could inspire and lead others, and act as an ambassador for the sector, while also succeeding personally.

Bennett said: “The IT Pack is always one of the highlights of the year - and 2011 has been no different. We have met some incredibly talented brokers from all over the country, and it was fantastic to see all our finalists again at the finale.

“I know the judges were bowled over by the quality of the brokers. It was incredibly hard to choose a winner - everyone who made it this far should be proud of themselves. In previous years, IT Pack winners have formed their own communities and stayed in touch with each other and with Insurance Times long after the event. I hope that will be the case this year, too, as I’m sure we’ve met some stars of the future.”

The winner of the IT Pack 2011 will be unveiled at the Insurance Times Awards on 6 December.

The IT Pack finalists were set the goal of reaching the open seas by 8am to receive points in the business challenge, writes Katherine Ball. Once that had been achieved, it was clear that everyone had found their sea legs and, aboard the Roxanna, everyone was admiring the beautiful sun rise.

The finalists did an excellent job of taking care of the judges, their ‘customers’, by ensuring that we were fed and watered, although they seemed rather keen on feeding us sausage sandwiches because they’d cooked far too many!

The sailing ended at the right time, with everyone buzzing from the experience, but with tiredness definitely setting in. I had to swing into drill sergeant mode and get the finalists back on dry land, reunite them with their luggage and get the non-drivers on board a coach to the train station.

Before departing, the IT Pack finalists received a quick de-brief from the skippers, Insurance Times and Aviva. The finalists also had to nominate a member of each team whom they felt deserved a prize - in this case, a bottle of champagne. I was delighted to see that each team voted their only female member as the person most deserving of the champers, considering how physically demanding the sailing activity was.

After talking about the highlights of the experience, giving pats on the back and a quick outfit change, the finalists were good to go. Trying to get them out of the building and onto the coach, however, was not easy. They all seemed to want to stay and talk!

Eventually the non-drivers had left for the train station and the drivers had packed up their cars and left. Which just left Insurance Times and Aviva with the mammoth task of deciding who the winner of the 2011 IT Pack should be …