Analysis: UK insurtech getting ready to scale the peaks 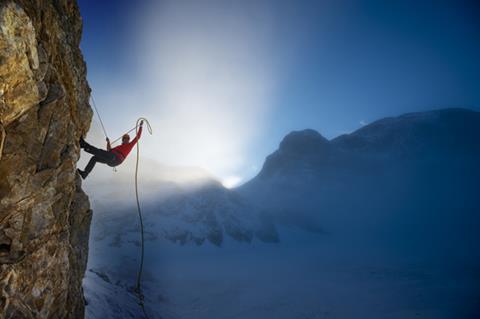 In June 2015, as the first fintech waves began to ripple, the World Economic Forum made a bold claim: The greatest impact of disruption would occur not in banking, but in insurance. The emerging landscape suggests they were bang on the money.

If insurtech spent the first half of the decade developing a definition, it has used the second to accumulate funds. Last year there were a record 173 investment deals, totalling $1.69bn. Early stage financing accounted for two thirds of them, rising 47% in volume and 56% in value to $508m, according to research firm CB Insights.

This is just the tip of the iceberg. There are an estimated 1,200 insurtech startups in the world, and around 170 in the UK, according to accelerator Startupbootcamp (SBC). Add other businesses with an insurance application, the numbers double.

Many of these businesses are also new. As of February last year, over 50% of Insurtech startups were no more than five years old; around a third were founded in 2014 or later, according to Venturescanner. 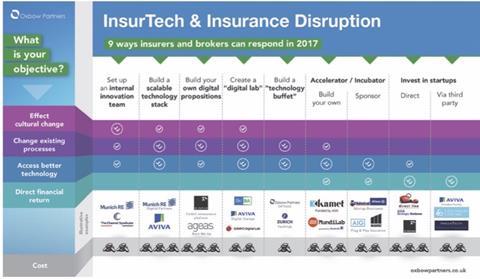 As cash and talent pours in from outside the sector – the last frontier in the disruption game – the UK insurance industry has begun, with characteristic reticence, to adapt.

“If there was a right way to do corporate innovation, there would be no disruption,” says Serge Taborin, digital innovation director at Aviva, which has three distinct innovation arms, including its in-house lab, Digital Garage.

Insurers including AXA, XL Catlin and Hiscox, and reinsurers including Munich Re have diversified with corporate innovation and investment divisions; others such as Admiral and Direct Line have invested in core technologies.

“We have taken multiple bets. Diversification of risk is always a good thing. It’s not a huge amount of money for a €100bn corporation,” says Parul Kaul-Green, head of UK strategy, M&A and innovation at AXA, adding that embedding of data scientists and artificial intelligence (AI) experts can combat the industry’s inherent conservatism. “If it ain’t broke don’t fix it is a leading mentality. This is a good way of hedging internal heuristic bias. The two sets cancel each other out.”

For those with a slightly shallower pockets, the insurtech ecosystem offers ample options. This includes incubators (where ideas are germinated) and accelerators (where existing companies are refined, prepared and connected to industry and investors). Such vehicles mitigate operational or regulatory impediments to product development. Internal accelerators, meanwhile, allow bigger brands to magnetize talent and ideas that would otherwise be lost or blocked in the traditional corporate chain, although commentators remain sceptical on their ability to develop truly innovative products.

Entrenched views of either side of the insurtech equation persist. “If you have an idea and go to an insurer, 90% of the time they tell you it can’t be done,” a senior source at an incubator says. A recent PwC report, meanwhile, noted that 83% of insurance chief executives considered insurtech a threat to growth – up from 69% in 2015.

“They can’t do anything until we say so,” says one observer at a major carrier. But the likes of Lemonade, with underwriting capabilities, and scores of partnerships between incumbents and startups (with tech research firm Gartner predicting 80% of insurers would acquire or partner with an insurtech by 2018) suggest this is hardly the point.

“One of our secret sauces has been the ability to access proprietary data to assess risk,” Aviva’s Taborin says. ”As we move into a world where the availability of data sources continue to increase, and technology like AI allow us to make sense of it, the advantage we hold will continue to be eroded.

“The threat of genuniely meaningful startups coming into this space and reinventing how insurance is done is very real.”

A disconnect remains between the perception and immediacy of disruption, and insurers’ appetite to either mitigate or exploit innovation. PwC said less than a year ago that only 14% of insurers had made a direct investment in an incubator or venture programme.

The same study found that half of executives feared 20% of their business would be lost to stand-alone fintech players.

“Insurtech will impact both top and bottom line,” says Sam Evans, founder of Eos Venture Partners, the UK’s first dedicated insurtech fund, and one of a handful worldwide. “On a conservative basis you can protect 20% and make another 20%. That’s a 40% swing.”

Given that transformational change tends to create unpredictable value, those figures could be higher. Eos’ emergence alone suggests the insurtech market is maturing, and expectations of a typical 3 to 5 year exit more realistic despite the systemic obstacles that have limited investment in the past. The recent €1m purchase of Irish travel insurance startup Blink, without a battle-tested product, shows that inherent value is sufficient for some companies to part with their cash.

The profitability swing theory cuts both ways. “We want to take our price out of the value we create,” says Laurence Rau, founder of Emerge Analytics, a machine learning platform based at SBC Insurtech that claims it can cut operating costs by up to 80%.

Incumbent support – whether financial, technical or something else – remains crucial, and why additional insurtech hubs will emerge in London, according to SBC Insurtech managing director, Sabine Vander-Linden.

Velocity may not be the industry’s strongest suit, but regardless of metric, model or media hype, on the horizon the UK insurtech wave has started to form.

Insurtech UK vs. The World