Heavy competition, combined with the recession, is putting increased pressure on commercial lines, as shown by Insurance Times’s investigation into the FSA returns
of six prominent UK insurers 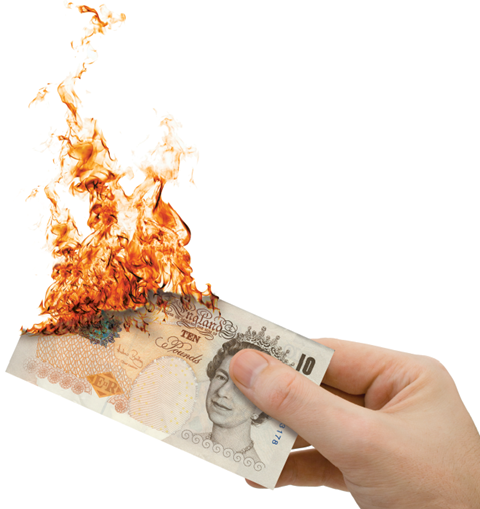 In May this year, Keychoice Underwriting managing director Jonathan Davey lashed out at “stupid” tactics in the commercial market for forcing him to outsource his company’s underwriting function to Towergate.

“There is business that is currently being quoted at 65 points less than the technical price,” Davey said at the time. “There is a lot of chief executive rhetoric about: ‘we must have price hardening in commercial lines’. Frankly it is nothing more than rhetoric.”

Davey is far from alone in expressing frustration with the cut-throat commercial lines market. Many chief executives of big-name UK insurers have bemoaned the heavy competition, and say the sector desperately needs rate increases.

An Insurance Times investigation into the FSA returns of some of the biggest names in the business shows clearly what the fuss is about.

If insurers have not brought their fixed cost base down, combined ratios start to turn nasty’

The FSA filings of six prominent UK insurers reveal that in 2011 the three main commercial lines - motor, property and liability - were, in most cases, heavily in loss-making territory. A notable exception was Allianz, which reported an overall profitable commercial combined ratio of 94.1% and sub-100 combined ratios in all but its commercial liability business.

Other profitable bright spots included Direct Line Group’s commercial liability business, and Aviva’s commercial property book, but these highlights were few and far between, with many insurers above the 110% mark on an overall basis.

Worse than year before

Some insurers were keen to point out that they did not feel the FSA returns reflected their performance (see panel). Sticking points include the fact that the calculations in the study exclude ‘other technical income’ - income, other than premium, from running an insurance business, such as business administration fees and commissions for acting as an agent for other parts of a large group.

But they did concede that commercial lines were challenging in 2011.

A spokesman for Aviva said: “Commercial motor profitability was adversely impacted by poor performing business lines in van, taxi and some schemes (which we exited where appropriate).

“During the year we applied significant rate action of 13% in commercial motor. In property and liability, rate increases remained below claims inflation in low single digits, adversely impacting profitability.”

Commercial lines are a particularly thorny issue for insurers because low rates, driven by heavy competition, are combining with recession-related effects such as lower demand and claims inflation to create poor results.

In addition, the fixed costs of running an insurance business are remaining static. “If insurers have not brought their fixed cost base down in line with the reduction in premium volume, then combined ratios start to turn nasty,” Ernst & Young insurance practice director Tony Sault said.

Sault predicts that rates are unlikely to harden in the near term, and that more insurers will start to exit selected lines of business.

With claims from last year’s riots still filtering through, the prospect of more claims from the recent flooding, and few signs of any upturn in rates or the economy, commercial lines are likely to continue to weigh on UK insurers’ overall profitability in 2012. Next year’s FSA returns could make even more uncomfortable reading.

Every ratio tells a story

Most commercial combined ratios were well above the 100% break-even point. Prior years had a significant influence on results. 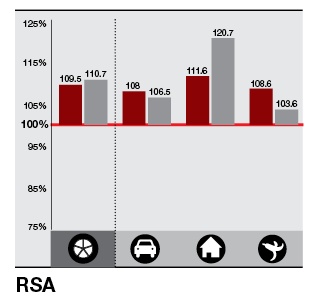 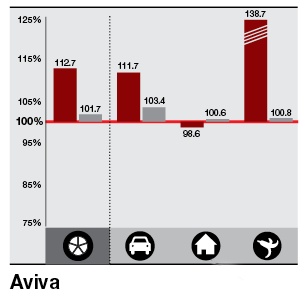 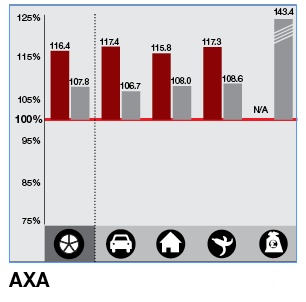 AXA’s commercial financial loss book had a
-169.6% combined ratio, thanks to negative claims from prior years 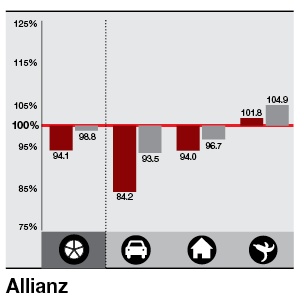 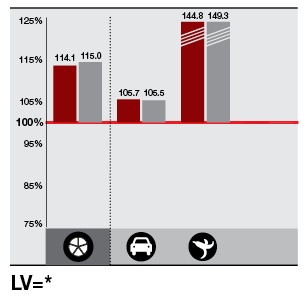 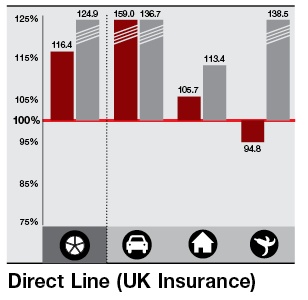 AXA Commercial Lines chief executive Amanda Blanc:
“While I understand how you produced these figures, I feel that the COR quoted do not properly represent the underlying 2011 position for AXA Commercial Lines. Last year included significant one-off costs related to the restructuring of the business, and the calculations ignore other technical income that contributes significantly to our overall profitability.”

Aviva spokesman:
“Using FSA returns data for comparison of company performance has significant shortcomings, most notably that FSA returns only cover specific entities within wider group structures… As such, FSA returns do not provide the whole picture. The overall performance of Aviva’s business (including commercial lines) is accurately presented in our regular results announcements, which are not subject to these distortions.”

We say …
● This method of calculating COR from FSA returns is widely recognised and used in respected studies, such as actuarial consultancy Towers Watson’s annual motor insurance industry report.