Lessons learned from the Christchurch earthquake

Just after 04:30 local time (16:35 UTC) on 4 September 2010, thousands of New Zealanders were jolted awake by an earthquake registering 7.0 on the moment magnitude scale. Within roughly 24 hours of the event, AIR issued insured loss estimates to residential and commercial buildings of between NZ$2.7bn and NZ$6bn (between £1.29bn and £2.87bn).

Based on initial estimates from the insurance industry, AIR’s model results in real time are in good agreement with reported losses. A week after the event, AIR was collaborating with researchers on the ground in Christchurch to perform a damage survey. The results of the survey, summarised here, contain some useful lessons for reinsurers about their exposures and the vulnerability of certain types of structure.

Beneath New Zealand, the Australia and Pacific plates collide; more than 14,000 earthquakes occur along this stretch of plate boundary each year. Most are unfelt. Only around 10 cause discernable damage.

The Christchurch earthquake was the most damaging seismic event in New Zealand since the Hawke's Bay quake in 1931. It produced a 22-km-long surface rupture in the Canterbury Plains near the town of Darfield. The fault initially blamed for the event had not previously been considered active.

New Zealand’s building codes are among the most stringent in the world, in large part due to lessons learned from the devastation wrought by the magnitude 7.8 Hawke's Bay earthquake – the largest to strike the country in recorded history.

The Hawke’s Bay earthquake highlighted the vulnerability of New Zealand’s unreinforced masonry (URM) building stock. In 1968, the New Zealand National Society for Earthquake Engineering, together with other organisations, introduced legislation to strengthen these high-risk structures.

Most recently, efforts to strengthen deficiencies in the most vulnerable of the still-existing URM buildings have culminated with the Building Act of 2004, which requires local authorities in each of New Zealand’s 73 territories to identify ‘earthquake-prone’ edifices – those that would have their ultimate capacity exceeded in a moderate earthquake and would be likely to collapse (Hopkins, 2009). Structures identified as such may be required to be brought up to at least one-third of the earthquake resistance standards for new buildings.

Beyond the one-third minimum, a specific strengthening level is not specified. As a result, territories have adopted varying levels of strengthening. This may in part explain the damage seen among older URM buildings following the Christchurch earthquake. URM continues to dominate the older building stock here. According to one report, there are almost 1,000 URM structures in the Canterbury region alone (Ingham and Griffith, 2010).

On 12 September, AIR joined forces with members of the Earthquake Engineering Research Institute (EERI), the Geotechnical Extreme Events Reconnaissance (GEER) Association, and faculty and staff from the University of Canterbury to conduct a damage survey.

The City of Christchurch (45km east of the epicentre):

Buildings in Christchurch fared well overall. Most engineered structures appeared completely intact at the time of the survey. However, severe damage occurred in a number of URM buildings in the Central Business District. Un-braced parapets toppled and, in some cases, inadequate connections between walls and roofs caused the collapse of the gable ends of upper walls.

Notably, many of the URM buildings that had been retrofitted performed very well. The survival of one built in 1858 was attributed to a retrofit that included vertical steel bracing along the joint of the chimney wall and along columns.

According to a local engineer, the most severely damaged engineered building in Christchurch may have been a parking structure at the Christchurch Women’s Hospital. The three-storey precast reinforced concrete parking structure with asymmetric steel bracing experienced severe structural damage to columns on its top floor due to torsional movement.

Despite the large magnitude of the quake, the structural damage that did occur in Christchurch was relatively minimal. Several factors contributed. First was the distance of the city from the epicenter; second, the rupture moved east to west, away from the city; finally, New Zealand’s stringent building code and good construction quality clearly proved their worth, leaving, in general, only older URM buildings to be singled out. 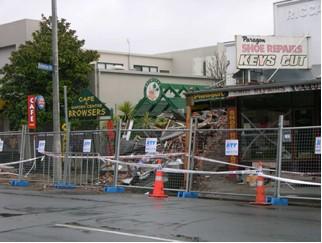 Bexley (50km east of the epicentre):

Throughout the survey, it became clear that a primary driver of damage was liquefaction, which happens when an earthquake strikes an area that is saturated with groundwater. The shaking causes the soil to act like a heavy liquid and lose its capability to support structures. Structures can tilt or even topple as the ground beneath them subsides.

While liquefaction had been identified as a potential hazard prior to this event, the Christchurch earthquake revealed that the area and severity of susceptibility was larger than previously thought. Indeed, a significant number of homes in Christchurch and nearby communities were impacted.

Bexley, a suburb in the east part of Christchurch City, was home to the worst hit street. The wetland soil there – backfilled in the 1980s – is particularly prone to liquefaction. Following the quake, more than 80% of the 200 single family homes on the backfilled plot had reportedly experienced some level of liquefaction damage.

Many homeowners in Bexley and other areas that experienced significant liquefaction will not be able to rebuild until their land has been strengthened, and made less susceptible to liquefaction in the future. This process could take two years.

In 1945, the government of New Zealand established the Earthquake Commission (EQC) to protect its citizens from the financial impacts of earthquakes. In the days following the quake, the New Zealand treasury reported that total residential and commercial costs to the EQC could reach NZ$2bn. The EQC initially estimated it would receive 100,000 claims, but on 4 December, two days before the claims deadline, it had received over 150,000 claims. The country’s Insurance Council is now calling the quake the largest single insurance event in New Zealand’s history.

Claims from this event that exceed the amount paid by the EQC will likely be covered by reinsurers. (More precisely, reinsurers pay EQC to cover the excess costs.) In 2010, ‘non-peak’ loss events such as the Christchurch earthquake took a heavy toll on the reinsurance community, serving as a reminder that the highest catastrophe losses don’t always come from peak regions or perils.

While the majority of engineered buildings performed well in the Christchurch earthquake, there is no doubt that the strength of existing vulnerable structures, particularly URM buildings, needs to be reevaluated. Conclusions about the fates of these buildings will likely result in policies that - perhaps more rigidly than the Building Act of 2004 - designate required levels of strengthening. Ultimately, however, the Christchurch earthquake once again proved the efficacy of strong building codes.