Times are tough but, according to exclusive Insurance Times research, ever-resourceful brokers are continuing to unearth opportunities.

Recognising that the broker market is not a homogenous entity, the results of the survey of SME business among British brokers are segmented by size of brokerage business, measured in gross written premium. This exposes some interesting insights.

Asked about the biggest cause for concern at the moment, brokers cited the economic climate and the uncertainties this had brought (fig 1).

LV= Broker commercial director Mike Crane says: “It’s no surprise the economy is the biggest cause of sleepless nights for brokers. It not only puts pressure on existing customers, but also reduces the flow of new business.”

But the impact of the economic climate tends to be of greater concern to large brokers with a GWP of £10m plus than to medium-sized (£2.5m-£10m GWP) or small (<£2.5m) businesses. Larger brokers were worried about the difficulties of earning enough revenue to cover the higher cost base, let alone make a profit, during inclement economic conditions.

Crane says: “It’s interesting to note that it is less of a concern for small brokers than the larger ones. This may reflect the different business models.”

The second most pressing area of concern involves rates. Once again, the survey reflects differences between the segments – rates are of most concern to medium-sized brokers but less so for large and small businesses.

Another question on rates (fig 2) indicates that although medium-sized brokers are more likely to think that rates are about the same as this time last year, there is little agreement on whether they have risen, fallen or remained the same. Perhaps that’s not surprising, given the wide range of SME businesses that brokers serve. 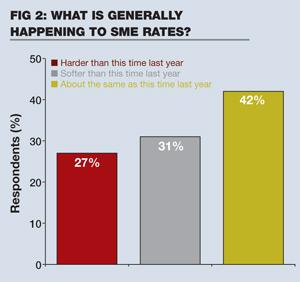 Small south-eastern brokerage Macbeth Insurance Brokers’ sales director, Tony Gibbs, believes there’s been little change in rates. He is concerned that insurers have been undercutting other insurers to buy in business, increasing the chance of rates falling and having a knock-on impact on brokers’ commissions.

LV=’s Crane takes a different tack. “Broker responses on rates confirm that commercial rates have yet to follow the strong trend set in personal lines last year,” he says.

The survey also quizzed brokers on how business volume has changed over the past 12 months for a range of specific insurance and specialist SME sectors. The results show that, with the exception of health insurance, business volumes increased for all the types of insurance cited – directors’ and officers’ (D&O), public indemnity and public and employers’ liability (fig 3). 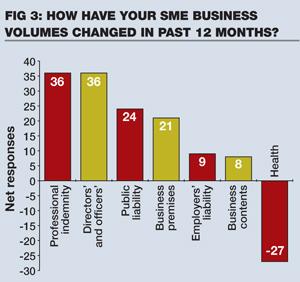 One possible reason for this finding is that individuals are setting up businesses as a result of the companies they previously worked for either closing or downsizing as a result of the recession. Another is that as businesses become more aware of their need for insurance in an increasingly litigious society, they are more willing to cover themselves.

But this does not fully explain why sales of these types of insurance should be increasing at a time when the economy is barely registering growth.

Ashbourne Insurance managing director Peter Smits, head of a mid-sized brokerage, sheds some light on this. He underlines the importance of working with existing customers, encouraging them to add insurance such as D&O and private indemnity to the staple fleet and commercial combined policies.

And while he agrees that customers are becoming more aware of the risks of litigation, another factor is at work: small businesses understand that liability cover is expected as a cost of undertaking work for the public sector.

As government cutbacks to the public sector bite in the next 12 months, Smits says, it will be interesting to see whether this type of cover continues to grow.

Business volumes were down for most SME consumer-related sectors referred to in the survey (fig 4), because many of these businesses have suffered during the economic downturn. 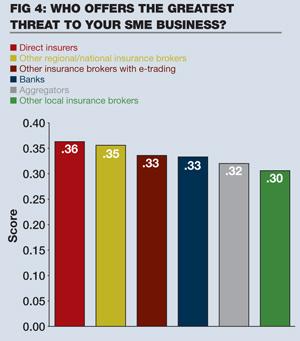 Gibbs believes the targeting of these lines by direct insurers is having a significant impact on smaller brokers, forcing them to focus on niche classes where ‘one size fits all’ policies from direct insurers are having less of an impact. Promising specialist sectors include cleaning contractors, recycling firms and security contractors, he says.

The survey demonstrates that competitive issues remain at the top of all brokers’ minds, although different competitors worry different brokers.

Competition from direct insurers was seen as a major concern by more than a third of respondents (fig 1), particularly medium and small brokers. This was not only raised by brokers when asked about their greatest concerns, but also when asked directly about who poses the greatest threat to their business (fig 1).

For Smits, this finding reflects the typical size of premiums paid by customers to small and mid-sized brokerage businesses. Customers paying premiums of £500 to £1,000 a year have less need for specialist help or knowledge and are more susceptible to offerings by direct insurers, he suggests.

Smits believes that the biggest threat to his business is customers’ ignorance about insurance. The best way to combat this, he says, is to recognise the value of meeting customers to discuss the risks to their business and how insurance can reduce this.

He understands the advantage that local players have over his brokerage on this, but believes other potential competitors – direct insurers, brokers with e-trading facilities or aggregator sites – cannot offer the face-to-face conversations that are vital if customers are to be properly protected.

So what are brokers doing to boost their marketing efforts against internet-based competitors? According to the survey, marketing methods remain traditional, with more than 80% of respondents relying on referrals to generate new business (fig 5). 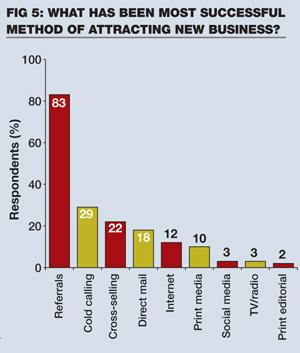 The method is common to all broker segments. Macbeth’s Gibbs says he is not surprised by the finding, acknowledging that by far the greatest volume of new business comes through existing customers and his company’s networking activities.

Cold calling is the second most popular method for acquiring new customers, but the survey’s results show that large brokers are more likely to do this than medium or small businesses.

Smits believes this is because larger organisations are more likely to have this kind of activity embedded in their sales process – although agencies are available that offer such services to smaller companies.

The survey’s most surprising results emerged when it came to advertising use. The results indicate (fig 6) that only about 10% of respondents used advertising, with internet advertising through sites such as Google marginally more popular than more traditional forms of print media advertising.

A pioneering few respondents – less than 3% – indicated that they have used social media such as LinkedIn as a way to reach potential new customers.

So should brokers advertise more? Given the evidence that customers are being lost to direct insurers, aggregators and e-savvy brokers, it seems traditional brokers should at least examine the opportunities on offer through new media.

There is no doubt that brokers continue to face a multitude of challenges and threats when it comes to their SME business. However, LV=’s Crane believes the survey shows that in the SME space, prospects are not as bleak as they sometimes look.

“It appears there is actually no clear threat for brokers to their business,” he says, “which I think shows the strong position brokers are in and the high regard they are held in by their clients.”

Clearly, brokers just need to keep up the good work. IT