Whiplash claims have fallen two years in a row. Meanwhile the government is pushing through new legislation to curb claims

Whiplash claims are falling, just as Parliament debates measures to curb the epidemic of soft tissue damage claims that are blamed for pushing up motor premiums.

The number of motor insurance claims passing through the Ministry of Justice (MoJ) RTA portal for low value personal injury claims has fallen by more than 12% over the last year, with the portal receiving 699,429 claims notification forms (CNFs) for the 12 months to the end of March 2018. This is down from 795,796 for the previous year, and marks the second straight year of falling claims. 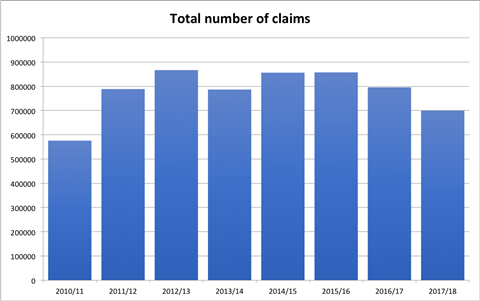 But DWF law partner Simon Denyer says the main driver for this lowering of claims volumes is actually anticipation of the possible changes coming through from the Civil Liability Bill, rather than any real change in how the market is operating. 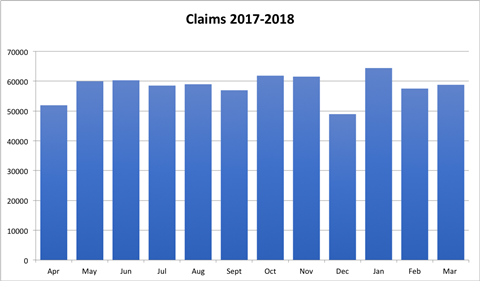 “That [trend of decline] corresponds broadly with the Chancellor’s Autumn Statement in November 2015 when the government announced it wanted to make this change. This led to the claimant market being disrupted and not taking on as many claims, particularly those likely to run into difficulties, and improved insurer processes for dealing with older claims, which usually have a greater risk of fraud.”

Data from the Compensation Recovery Unit (CRU) has revealed a similar trend of falling RTA claims, with the number of motor claims notified to the CRU falling by 16.7% to 650,019 for 2017/18, making it the lowest year for motor claims since 2009/10.

The CRU stats were widely debated at the second reading of the Civil Liability Bill, and Denyer says the new statistics could have an important role to play in the progress of the new regulations.

“The decrease in claims volumes has enabled those arguing against the bill to point to that decrease, which enables them to say this is not a problem – the issue is solving itself and going away,” he says. “The government is responding to the drop in claims volumes by saying: “Yes, there is a fall but you have to look longer term in to the past.” 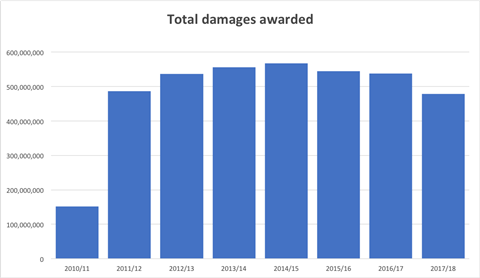 Ultimately, this means that the bill will not have an easy run, but the government is still committed to getting the bill passed.

“The bill is not going to have an easy run – there are lots of vested interests with many wanting to continue the current system,” Denyer says. “The government says there has been a step change in the number of claims because of the way the industry has developed, and that needs to be changed.

“The government also says that a drop in claims volumes over one or two years is still not enough to say the problem is going away, and if the drop has come because of proposed reform changes then removing those reforms could see numbers increasing once again.”

Over that period, the level of average general damages paid by case has largely been on the up, with average damages rising for 11 of the last 12 months to reach £2,808 in March 2018.

Denyer says there are a number of factors leading to this increase in average damages. 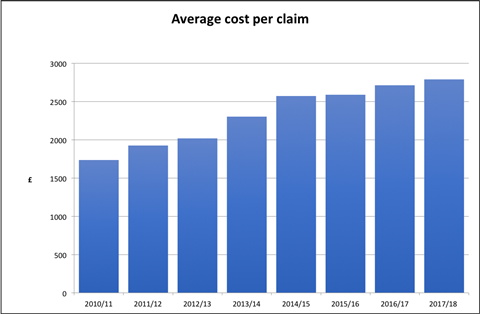 “One factor contributing to rising levels of average damages is the Judicial Studies Board Guidelines that came out in September, and that usually has an impact a couple months later,” he says. “We are now 1.1% above the PSLA (pain, suffering and loss of amenity) level seen prior to the Judicial Studies Board coming out, and they proposed a 4.8% increase over two years, so we would expect to see that feeding through gradually.

“The other longer-term factor is the increasing tendency for claimants wanting to take cases through to stage three to get more damages, especially if lawyers think insurers are making a low offer. But this also increases the costs that claimant lawyers get, with costs possibly doubling by going to stage three. That has been less of a factor over the last year, however, because of the longer waiting list for a stage three hearing meaning they have to wait longer to get their fees.”