Underwriter Clinic: The time and place for data

Our event asked the question: what is more important, the latest technology or good old-fashioned skill and judgement? 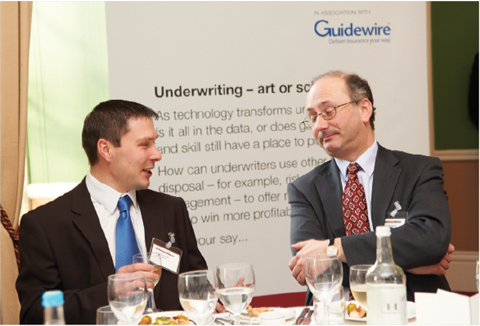 Using technology to underwrite will become common for the lower end of commercial lines, according to RBS Insurance director of commercial underwriting Martin Hall.

Speaking at an Insurance Times and Guidewire event in London on the growth of underwriting technology compared to underwriting skill and instinct, Hall said: “At the smaller end of commercial, it is likely to be more of a data and analytical game. For the larger customers, it is about using data and systems to deliver data at the right point of the underwriting process, and should be a tool, not a rule.”

Manually underwriting risks of less than £2,000 is not cost-effective and will only become less so, he said.

Insurers with large customer bases have traditionally had an advantage in areas such as personal lines motor because they have more data to draw on for underwriting risks, Hall said.

Widespread use of telematics will shake this area up, he added. “When you add developments such as telematics – which can be far more powerful in real-time pricing than historic data you’ve had for years – it does give a different opportunity.”

Insurers that are only using data on current customers to help their pricing are missing a trick, Hall said. In areas like motor, it will help insurers to use information from unsuccessful applications and rejected quotes as well. “Data you have on customers you don’t pick up is just as valuable, if not more so, than on customers you do pick up.”

ACE European Group UK and Ireland D&O manager Simon Million said that insurers relied a lot on historic data without considering how this might become redundant, and that this was particularly important in lines such as directors’ and officers’ liability. “It’s great looking at 10 years of historical data, but in my line of business, if the law changes that historical data goes out the window when it comes to rating. Historical data is not the be-all and end-all.”

Technology can also help portfolio underwriting by pointing out the anomalies in large numbers of similar risks, he added. “You can use technology to identify areas of concern, and that’s where I think technology is key to writing portfolio business.”

According to Guidewire Software product marketing manager James McCully, although technology will become more embedded in commercial lines underwriting, making a profit will still rely on the skill of the underwriter. “The way they are able to go beyond the system price and use their vision, that’s where you will see profitability come through,” he said.

Underwriters of the future will need to be more actuarial than they are now to deal with the rise in data, according to RBS Insurance director of commercial underwriting Martin Hall.

This will be more prominent on larger commercial risks but less common for more commoditised personal lines, he said. “On larger risks, there is a need for a blending of the skillsets because you can’t always separate the two as easily as you can for commoditised business.”

The ideal new starter at RBSI will need to have a blend of skills, Hall said. “I think we go for the holy grail of analytical people with charisma - they are the really dynamite mix of decision-making ability and relationship skills,” he said.

Over-reliance on technology to help underwriting could lead to a gradual deskilling of this sector in the future, said ACE European Group UK and Ireland D&O manager Simon Million. “The thing that worries me a little bit is: are we producing underwriters that will tap things into a computer, get a price out and won’t have that gut feel that we have at the moment?”

Many still start their careers learning about underwriting small risks in the traditional way, however, he said. “I still think we bring juniors on who start with the smaller business, but it’s a lot fewer than we used to bring on.” But technology in underwriting has led to greater pricing consistency. “Less people touching a piece of business means you get more consistency there.”

There is a danger that the growing amount of technology and data available to underwriters could end up making their work more complicated, according to Guidewire Software product marketing manager James McCully.

“Too much data can obscure the purpose or rationale behind the underwriting itself,” he explained. “Data needs to have a purpose, you need to know how to use it. This can only be done by someone with expertise in evaluating the risk.”

Underwriters also need to beware of interpreting data too freely, he warned. “If you don’t have a large enough sample size, it can be a risky proposition to use data to evaluate a risk.”

But, as insurers get better at understanding their data, McCully believes this will lead to more accurate pricing, as insurers build better modelling software to predict risks.

“I think technology is very good for people who have been in the industry a long time and know the limitations of it. The younger people will look at the figure and think: ‘It’s so scientific, it must be right.’ For people outside the industry, the perception of an underwriter is going to be de-skilled, so we will not attract people with the right mindset.” Tim Raistrick, group corporate business senior underwriter, NFU Mutual

“Wouldn’t it be the skill of the younger person to ask, ‘Why is this trade more hazardous than this trade?’ Those questions exhibit the skill. Less skilled underwriters might just take the number presented from the screen; the better ones will question it.” Karneet Chowdhury, property underwriter, Brit Insurance

“A lot of the underwriters using these systems have no idea how they’ve been constructed. That’s been done elsewhere, so they have no understanding of why that price comes out. The systems are controlled by different people from the people who should understand them.” Jonathan Whitnall, underwriter, Aspen Insurance