Carl Icahn has sold his stake in AIG, according to reports.

The billionaire activist had a 4.76% stake and was the third largest shareholder at the end of 2017, Thomson Reuters data shows.

The stock was reportedly changing hands between $60 and $65 when Icahn sold his stake.

After news of Icahn’s stake sale broke on Monday morning, shares in AIG fell by 1% to $52.30, Reuters reported.

Icahn has made a mark on AIG in his time as a stakeholder.

The controversial investor began buying shares in AIG in 2015.

That year, Icahn put pressure on the insurer to split into three, deeming AIG “too big to succeed”.

He developed an intense rivalry with AIG chief executive Peter Hancock and AIG’s board.

In 2016, Icahn said the credibility of the insurer’s management was ‘all but gone’.

Hancock resisted Icahn’s attempts to unseat him until March 2017, when he left amid rumours he was going to be forced out of the troubled insurer.

When Brian Duperreault took over, Icahn reportedly eased his pressure on the troubled company.

Profile: Icahn, the raider with AIG in his sights 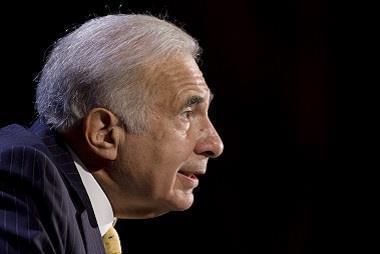