Trainer Willie Mullins dominated Day One at Cheltenham. Douvan (nap), Annie Power and Vroum Vroum Mag (win) all won big for the Irish trainer. Whisperer’s each way tip Kruzhlinin came fifth in the 2.10pm, so if your bookie was paying down to fifth place don’t rip up your slip. All in all it was a decent start for punters who followed my advice.

After the breaking news yesterday that Vatour will run in Thursday’s Ryanair Chase and not the Gold Cup, it appears that punters are unhappy with Rich Ricci. After supplementing Taquin Du Seuil for the race, business legend and horse racing fanatic Sir Martin Broughton is also looking a tad disgruntled.

Dodging Bullets (see picture below) was leading the string in Ditcheat on Monday ahead of defending his crown in the Queen Mother Champion Chase today. Let’s hope his time over two miles is quicker than his owner Adrian Brown, who appears to be more of a stayer after completing the Bath Half Marathon last Sunday in a very respectable time. 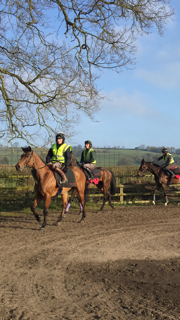 Little known fact: PIB chief Brendan McManus’s father, JP McManus, has the same initials as the legendary race horse owner JP McManus, whose colours are the green and gold hoops. But, to be sure, they are not the same person.

The RSA chase (2.10pm) is on the card today, with More Of That and No More Heroes set to attract plenty of interest. Three past winners of the Champion Chase (3.30pm), including 2015 winner Dodging Bullets, line up in the big one, with Mullins-trained Un De Sceaux odds on in the betting with Ruby Walsh on board.

Dodging Bullets, aka the ‘Dodger,’ has a strong insurance pedigree. RDG’s Derek Coles, Markerstudy’s Martyn Holman, Ingenie’s Steve Broughton and Towergate’s Adrian Brown all have a share in the horse, which is on his way back from injury. 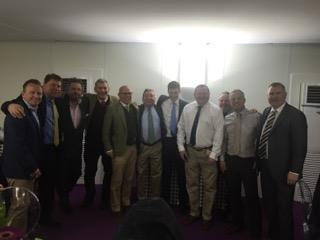