Cheltenham 2016: Our insider gives his tips for day three

What a day for racing. You have to take your hat off to Sprinter Sacre for his tremendous performance in the Champion Chase. He didn’t do my e/w tip Dodging Bullets any favours, powering home by seven lengths, but otherwise punters who backed Whisperer’s e/w Diego de Charmil at 13/2 for the Fred Winter would have made up their losses.

As I look through the card, I can’t help but notice how many insurance sponsors there are in racing. PIB sponsor jockey Sean Bowen and Ryan Direct Group support the up and coming Nick Scholfield, who is part of the Paul Nicholls set up at Ditcheat.

RSA has been a lead race sponsor for many years (including the Sun Alliance Chase), and Whisperer caught up with Mark Christer and Mark Allan at the course yesterday to see Blaklion come home in the RSA at the expense of my win tip More Of That (see picture below). 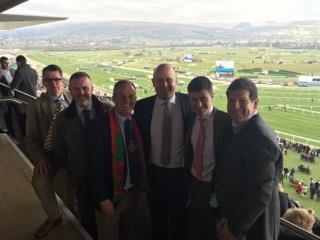 Heavyweight international broker JLT sponsor the first race on the card today, the JLT Novices Chase at 1.30pm, and not to be outdone by the brokers and carriers, the London Market is represented by Novae, sponsors of Lizzie Kelly (pictured below), and Amlin, who sponsor jockeys Richard Johnson. Tom O’Brien and Joshua Moore. 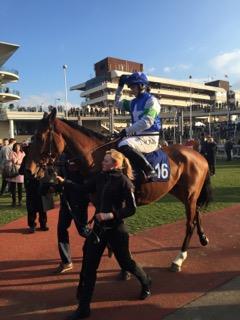 The legendary Barry Smith, now retired from Ageas, was rumoured to have had his second place pot of the Festival, on Tuesday and Wednesday. Whisperer noted that Barry had a very broad smile on his face yesterday afternoon.

The Irish contingent will be going for it today to celebrate St Paddy’s day, and there’s another packed card.

In the Ryanair Chase at 2.50pm the Whisperer says it’s hard to see past Vautour (currently 8/11 on) but Taquin Du Seuil may offer each way value to the odds-on favourite

Nap of the day for Whisperer comes in the Ryanair World Hurdle at 3.30pm. Thistlecrack, trained by Colin Tizzard, (who also runs Cue Card in the Gold Cup on Friday), should be hard to beat. Punters seeking better each way value in that race should take a look at Aux Ptits Soins, trained by Paul Nicholls, currently trading at 14-1.

Whisperer’s Win bet of the day is Bristol de Mai in the opening 1.30pm race, the JLT Novices Chase, and offered at a decent 5-1 by Coral.

My each way bet is in 5.30 pm Amateur race. I like Doctor Harper, trained by Martin Pipe, ridden by Will Biddick, a capable pilot. The horse is currently offered at 10s, but money is coming in fast and the odds will shorten.