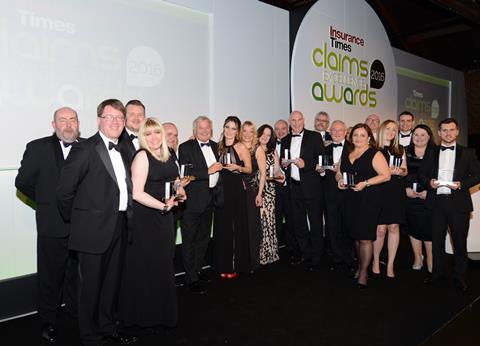 LV=, Allianz and Cunningham Lindsey were the big winners at the Insurance Times Claims Excellence Awards 2016.

The insurance industry flocked to The Brewery to recognise the efforts of claims teams and individuals across the industry.

Picking up the lifetime achievement award of the night was Ecclesiastical church and heritage claims director Andrew Brown.

What the judges said: Davies’ overall training and HR talent proposition brought impact to the wider business, while its initiative with Staffordshire University was praised as an impressive partnership that helped provide a clear career path through the business.

What the judges said: This insurer undertook a massive overhaul of how it coaches and drives its 1,600 people who work in claims. It recognised that the previous system wasn’t working and built a new system from the ground up, with the help and support of the whole team.

Legal Partner of the Year

What the judges said: This legal firm has developed high levels of expertise in the defence of occupational disease and abuse claims. It also launched a cloud-based system for storing and sharing data. The judges were particularly impressed with this firm’s exemplary client retention rates over a substantially long period of time.

Claims Technology Initiative of the Year

What the judges said: Sequel is a new entrant into the claims system arena and offers real potential through its configurability and flexibility. Judges were impressed by the digital technologies Sequel introduced, such as intelligent workflow automation.

What the judges said: Judges commended how Cunningham Lindsey took the time to focus on what truly mattered to individual customers rather than simply settling a claim. This problem-solving attitude gave demonstrably better service to customers as a result.

What the judges said: The winning entry showed how customer care is at the heart of the whole company culture. Setting up a temporary office in Kendal to support customers who had suffered excessive flooding and flying in car repair specialists after a severe hail storm in Durham are just two examples of how this insurer has gone well beyond the line of duty when responding to a customer crisis.

What the judges said: The winning insurer won over the judges with its commitment to regular face to face contact with key independent brokers, including the allocation of a dedicated claims account manager. A refreshing approach in this digital age.

What the judges said: The judges were impressed by how two major insurers have come together in a ground-breaking collaboration to create a potential industry-wide solution to significantly drive down the average life cycle of relatively straight forward claims.

Fraud Prevention Initiative of the Year

What the judges said: This was the first insurance company to work with the Insurance Fraud Enforcement Department in a six month pilot. Their claims crime prevention technical controller Matt Crabtree was sent on secondment to this department to provide previously unknown insight into the insurance world from a totally different perspective. Crabtree had a lead role in the 2015 household fraud day of action, IFED’s biggest yet, with 42 suspects spoken to. His work also led to assessing 218 referrals, with loss value to the industry of £13.3 million and investigations into 13 organised fraud rings, with existing losses to the industry of £4.7 million.

Claims Individual of the Year – Broker

What the judges said: Personally affected by the storms that flooded Cumbria in 2015, Stephen went above and beyond what could possibly be expected of him both personally and professionally. With his own home flooded, and other family matters to deal with, including having to care for two small children, Stephen used social media to support claims for both his own and non-Bluefin customers. Praised by his local community for the help he offered to them for free, judges commended Stephen further as an outstanding advocate for the insurance industry at its best.

Claims Individual of the Year – Insurer

What the judges said: This highly self-motivated, enthusiastic and driven individual really impressed the panel. Last year she successfully led a major operational integration and culture change programme following a business acquisition. With a limited brief, she designed and launched a flexible 18-month training programme called Technical Leaders in Claims. She is a real rising star.

Broker Claims Team of the Year

What the judges said: Judges highlighted Deacon’s innovative approach to claims, at the heart of which lay an investment in technology to support its staff. Judges also commended Deacon’s use of CPD accredited training for managing agents. The entry was additionally backed by overwhelmingly supportive testimonials.

What the judges said: In this competitive category Alps was commended for identifying a need for brokers to have a close connection with claims management teams and for setting up small teams to look after their brokers. This strong operating model, based on what customers needed, delivered a unique service to each fleet and helped Alps grow rapidly in 2015.

What the judges said: BLM and Cunningham Lindsey have demonstrated a ground breaking partnership in the industry by joining up two ends of the liability claims process. This has yielded clear tangible results and reduced litigation rates.

Insurer Claims Team of the Year

What the judges said: The winning entry enhanced the customer experience in casualty claims by protecting them from fraudulent claims while genuine claimants received a much improved service. The introduction of buddy and traffic light systems helped to increase the level of fraud detection, generated considerable cost savings, and resulted in more cases that went to trial being won.