A bishop has been jailed after using the details of two people in his local community in a car crash scam.

Charles Motondo, 40, of Nowell Walk, Leeds pretended to be a member of his local community on the phone and then tricked insurers to pay for the fraudulent car crashes.

Motondo pleaded guilty to three counts of fraud by false representation and one count of money laundering at Leeds Crown Court on Friday.

After a tip off from insurance group First Central on Motondo, the City of London Police’s Insurance Fraud Enforcement Department (IFED) launched an investigation that led to his conviction.

In one of the scams, Motondo used the details of one of his community members to buy an insurance policy.

A few days later, he called First Central, pretending to be the policyholder.

As the pretend policyholder, he claimed to have crashed a Vauxhall Corsa into a parked car - a Range Rover that he owned.

Motondo then called First Central a few days after his previous call, this time as himself, and put in a claim for damage and the cost of a hire car.

A forensic engineer said that the alleged damage to the Range Rover could not have been made by the Vauxhall Corsa, as the height difference was too much.

The alleged damage to the Range Rover was also the same as the damage which led to the its most recent MOT failure.

Finally, the Corsa in question couldn’t have been involved as it was being stored in a yard behind the church - which IFED later found to be where Motondo delivered his sermons.

This time, it was for a made up collision against Mulsanne Insurance. He pretended his partner’s Jaguar, as well as his Range Rover, had also been involved in the alleged collision, in order to increase the value of his claim.

Motondo also tried to make an injury claim for a phantom passenger, but this was rejected by Mulsanne after they found out from First Central about his other fraudulent activity.

The person whose details Motondo had used for this fake claim told IFED that the accident never took place and that the car wasn’t ever insured.

They also revealed that Motondo had helped them buy their car.

IFED identified one final fraudulent claim by Motondo, in which he called his insurer Aviva, stating that he’d been involved in a collision that was his fault.

As he and his partner aren’t married and don’t share the same name, he contacted Aviva again, this time pretending to be her husband and made a claim on her behalf for repair costs to the Jaguar.

Detective constable Jamie Kirk, who the led the investigation for IFED, said: “Despite being a Bishop, Motondo was completely immoral in his actions, and had no issues using other people’s personal details to make fraudulent claims so that he could make a financial gain.

“Motondo may have thought a person of his standing wouldn’t get questioned by insurers or the police, but today’s conviction shows that nobody is above the law and that anyone who commits insurance fraud will be brought to justice.”

Paul Twilley, a claims director at Mulsanne said: “This investigation is an excellent example of the insurance industry collaborating to investigate and defeat an individual who attempted to defraud a number of insurers with a web of deceit involving fraudulently obtained policies which were set up to facilitate false claims.

“Mulsanne is extremely pleased to have been able to assist IFED detectives in bringing the offender to justice.”

Jonathan Guy, chief claims officer at First Central said:“Using intelligence by First Central and working with another insurer to obtain further evidence, our claim investigations team found Charles Motondo had made a fraudulent claim after it featured several fraud indicators. A referral to the City of London Police was subsequently made.

Tom Gardiner, head of fraud, Aviva UK GI, said: “This case is a shocking abuse of position, but shows that insurers and police have effective mechanisms to work together to ensure that those who seek to profit from insurance fraud are detected and brought to justice – and that no one is out of reach.

“Insurance fraud is a crime and pushes up premiums for honest customers. So we welcome today’s sentencing, which should serve as a strong deterrent to anyone thinking of committing insurance fraud: it doesn’t matter who you are, if you commit fraud, it’s now very likely you will be caught and prosecuted.” 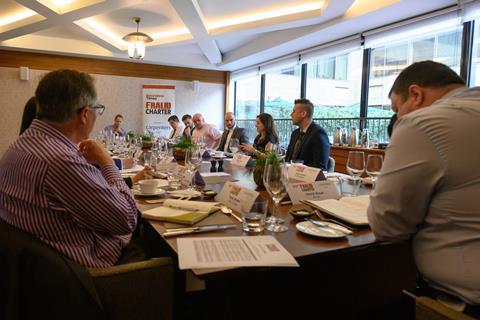