As the end of 2020 draws closer and Brexit is upon us, the issue of whether green cards are required for UK motorists driving in the EU after the transition period is still up in the air

UK motorists risk being held liable if they do not have a physical copy of a green card when crossing the English Channel after the Brexit transition period ends on 31 December.

In a worst-case scenario, motorists could see fines, prosecution or their vehicles being seized and impounded, according to the Financial Times.

Brussels is reportedly refusing to waive a decision that would remove the need for UK drivers to carry a green card in Europe and Ireland after 1 January 2021, despite the UK requesting this issue to be addressed more than two years ago.

In a statement on its website, the Association of British Insurers (ABI) reminded motorists in Northern Ireland that they will need to carry an insurance green card when driving across the border to the Republic of Ireland (as well as the rest of the EU).

This is unless there is an agreement for an alternative.

The ABI continued: “All European Economic Area (EEA) countries (EU countries, and Iceland, Liechtenstein, Norway) are part of a Green Card free circulation area, meaning that motorists based there do not have to carry Green Cards when visiting other countries in the area.”

This leaves the issue up to EU-UK trade talks. 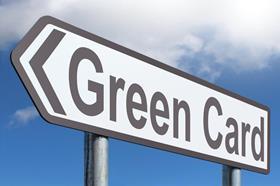 The green card is a physical document that acts as a proof of a third-party international certificate of insurance for a minimum of 15 days on a vehicle so drivers can legally use their vehicle in the EU.

Electronic copies or other proof of third-party motor insurance will not be deemed acceptable and motorists with caravans will need two documents.

Although as the Department of Transport recently revealed, green cards no longer have to be printed on green paper.

It is part of a system created by insurers and includes more than 40 participating countries, as well as the entire EU.

The ABI said: “However, when the transition period ends then UK motorists will be required to carry green cards for driving in the Republic and other EU states, unless the European Commission agrees that the UK can remain in the green card scheme.”

The ABI recommended that motorists contact their insurer a month before they intend on travelling.

And valid insurance discs will be accepted as proof of insurance for Irish motorists driving in Northern Ireland and the rest of the UK.