The third and final event of this year’s Insurance Times Broker 50 saw some of the industry’s top brass debate key issues affecting them, from the FSA’s regulation shake-up to the impending arrival of the FCA 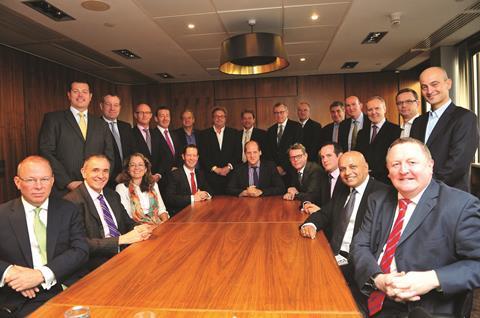 For some, 8.30am may be an early start. But following a hearty breakfast and inspiring views of London, courtesy of Tower 42’s 24th-floor restaurant, members of the Insurance Times Broker 50 were wide awake and raring to get stuck into the subjects for discussion at the Winter Rendez-vous.

Topics ranged from the FSA’s shake-up of client money regulations to whether insurers have learned from past mistakes. There were also proposals about how brokers could work better with the new regulator, the Financial Conduct Authority (FCA), when it takes over the regulation of brokers next year.

The Winter Rendez-vous was the third and final event in the first year of the Broker 50, which also included successful meetings in Chelsea in April and Hyde Park in July. Chief executives from the industry’s most prominent brokers gathered at Tower 42 with representatives from sponsors ACE, Ageas and Enterprise Rent-A-Car to put the broking world to rights.

Following the comment by FSA Conduct Business Unit managing director Martin Wheatley in September that he intends to “shoot first and ask questions later” when he takes the helm of the FCA next year, regulation was always going to be high on brokers’ list of hot topics.

There was concern around the table that the FCA was going to seek high-profile ‘scalps’. Some also commented that the regulator mainly focused on top-tier brokers, with smaller firms sometimes slipping through the net.

Since his memorable comment earlier this year, Wheatley has vowed to get tough in a number of areas affecting brokers, including client money and premium finance.

Client money is a particular point of contention for brokers. They are seeing unconditional risk transfer from insurers for client money. In other words, they want insurers to accept sole responsibility for safeguarding client money in the event of problems.

Brokers argue that as the industry’s risk takers, only insurers have the capital bases to underwrite the risk of something going awry.

Insurers are clearly keen to see that some conditions remain, however. They want to support risk transfer and are working with Biba but also want to ensure there are some controls around it.

The FSA’s scrutiny of premium finance, which many brokers offer to clients, also got the table talking. Unlike low-value insurance products, the issue here seems to be the inconsistency of interest rates being charged, which some contend can range from 0% to 30%. But some felt that, from the perspective of treating customers fairly, the rates charged by brokers needed to be seen in the context of online loan companies charging interest rates in the thousands
of percent.

There were also suggestions that brokers as a group should engage with the FSA in a non-aggressive way to understand the regulator’s goals.

The brokers also discussed the state of the UK general insurance market. Some felt that lessons of the past had not always been learnt, and that insurers were willing to accept business at far lower than the technical rate at which they could expect to make an underwriting profit. One participant went so far as the say the gap between actual and technical pricing was the widest in memory.

Brokers will have more opportunity to air their views at the Broker 50 events next year, the first of which will be held in Oxfordshire on 18 April with activities including clay-pigeon shooting. This should be perfect for venting frustration about niggling industry issues.

“It is always interesting to meet friend and foe. Actually, most of the brokers in the top 50 are well known to each other and are very cordial, in public anyway! This was certainly the case at the last Broker 50 event, but that did not stop those present having opposing views on many subjects. What was obvious is that the worlds of private car and commercial insurance face starkly different challenges in the marketplace. This will come as no surprise, but what they certainly do have in common is heightened interest from the new regulator looking at areas which, in the past, were not of interest to the FSA. Much discussion was had about
regulation and the market in general, and it is good to see that this group of competing brokers seem very much in fine fettle, despite the vagaries of the economy and the market.”

“The Broker 50 event was really useful and allowed our peer group to have some great conversations about issues that bother us all: the effect of the change of regulator, the various interactions with our FSA friends, and how the carrier market is changing and its effect on all of us. It’s fascinating how the different segments of the broking market feel the effect of a change - for example, the change from the FSA to the Financial Conduct Authority - very differently.”

“It was very useful to meet with lots of our peer group of brokers and to exchange views on the major issues effecting the broker sector at the moment. The discussion, with plenty of different views, is a great way to help to refine our own thoughts and position on their impact. All the big issues were covered: the client money changes, the changing regulatory environment and the potential for mandatory commission disclosure. These will all have a substantial impact on the broking sector in the months and years to come, and to be considering them early is vital.”