Chief Execs’ Chief Exec: How they did it - Barry Smith and Phillip Hodson

As we launch the voting for this year’s Chief Execs’ Chief Exec awards, last year’s winners talk to Insurance Times about what it takes to be a great business leader 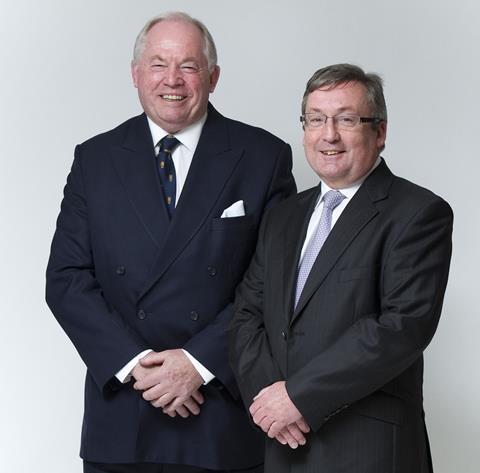 What makes a good leader? Barry Smith of Ageas and Phillip Hodson of Oval should know. Last year, they won the first Insurance Times Chief Execs’ Chief Exec of the Year awards - for insurers and brokers, respectively. As we launched the voting process for this year’s award, we caught up with the two bosses to talk about the best and worst aspects of being in charge, particularly in today’s economy.

Both Smith and Hodson have an impressive roll call of achievements to their names and both are respected by their peer group. Under Smith’s leadership, Ageas has boomed from a minor player on the UK scene to a significant force, and one that has its own strategies: for example, it has built a significant personal lines distribution arm through acquisition, and sealed a joint venture with Tesco.

Hodson, meanwhile, is widely respected for having built a top 15 brokerage out of nothing, and for his uncompromising and forthright opinions. His leadership qualities have also been recognised outside the industry - he was recently elected as chair of the Marylebone Cricket Club.

Given this glowing pedigree, can Smith and Hodson explain what they think good leadership really is? Smith begins: “It’s about setting a clear and consistent direction; focusing on the customers’ needs as central to the business; building strong relationships with your clients and partners; and looking to see how you can create, with a strong team, the emotional engagement to take that through to execution and delivery.”

Hodson observes: “It’s about your own style. I’m a leader, not a manager - I’d make a terrible manager.”

With that confession out of the way, he continues: “It is about trust and integrity. You’ve got four stakeholders - clients, staff, insurers and investors - and they’ve got to trust you. They may not agree with you, but they need to trust you to deliver.

“When it comes to your staff, the importance of trust and integrity is very high. These are difficult times for insurance broking, so you’re having to give your staff difficult messages. If you don’t have trust, you will see people leave in droves.”

As the conversation continues, it becomes clear that Smith and Hodson agree about many of the qualities required of a good leader - and that, for both, it has a lot to do with an individual’s human attributes as well as their business skills.

Hodson says that the ability to inspire trust is in a leader’s DNA. “You can train leaders to a certain level, but after that I don’t think you can,” he says. “Inspirational leadership — your Churchillian leadership - is inbred: you’ve either got it or you haven’t.”

He points out the importance of the right person for the job: “Churchill was a poor peacetime prime minister, but a brilliant wartime prime minister, because he had a knack for saying the right thing at the right time to inspire people.” However, both chief executives dismiss the suggestion that broking and insuring require different kinds of leadership.

From the outside, the perception is that brokers are more entrepreneurial than insurers - that’s nonsense,” says Hodson. “Good large institutions need entrepreneurial ability.”

He gives an example: “It’s interesting - people tend to characterise Peter Cullum as the leader of a broker, but in many ways Towergate is modelled on an insurer rather than a broker. Obviously he has been hugely entrepreneurial and changed the face of the business.”

Hodson believes, however, that insurance companies can be hamstrung by their size. “Sometimes in large institutions, including insurance companies, entrepreneurialism is inhibited by long lines of reporting and decision-making,” he says.

Smith sums it up: “You strive for a balance - it’s the entrepreneurial esprit de corps, in a controlled way.”

Hodson raises another aspect of leadership: “It’s almost impossible to be a good leader without a good team. It’s like being manager of a football club - I can’t see Alex Ferguson doing too well with Stockport County.”

“The building of a team is so important,” he continues. “I don’t think any human being ever gets it right the first or second time. Your team melds together, you need people with different skills and people who challenge you. That’s always difficult - some leaders do not like being challenged. Churchill is a case in point.”

Smith interjects: “The real value you add is if you can gain an emotional attachment to what the business is trying to achieve.”

“That’s it,” says Hodson. “Barry, in one sentence, has summed the whole thing up.”

Clearly, Smith and Hodson agree that a leader needs to inspire emotional attachment in their people if they are to deliver results. “In any discipline, such as in sport, this can mean the difference between someone having the skills and executing those skills supremely well,” Smith says.

Emotional attachment is especially difficult to create and maintain during a recession. “I’ve been through three or four recessions, but nothing like this,” Hodson says. “I know that our younger people in five or 10 years will benefit from having gone through this difficult economic period. To be a good leader in these times is more difficult, but even more important, and they will come out the better for it.”

Hodson believes that leaders must be optimistic at all times, and Smith agrees that the role requires a ‘can do’ attitude.

What, then, of redundancies? How does a good leader communicate and execute the most difficult of all management decisions?

Hodson sighs. “I come from a background that finds redundancies very difficult,” he says. “I started as a one-man band and, as that, you don’t make people redundant - you go home and talk to yourself in the mirror.”

He continues: “We reacted slowly to the economic recession, so the past 12 months have been exhausting and we have been delivering some redundancy messages. I think if you do that fairly and squarely, that’s fine — the difficulty comes with your 1,125 other people that are left.

“My favourite phrase is ‘pour encourager les autres’ - you’ve got to make sure you’re doing that to make sure that you have a stable base and you are getting rid of good people because the economic conditions do not allow you to have certain roles within the company on balance.

“It’s very important that the other 1,125 staff understand why you’ve done it and that it’s for the benefit of the company. The company has to become their family, their team. That’s difficult when the chap over there they work with
is being made redundant, so you have to deal with that up-front and explain. I go round every office to see them all once a year.”

He adds that brokers are traditionally poor at handling redundancies because of their small-business culture, whereas insurers tend to take a more strategic approach.

Smith warns that redundancies should be an absolute last resort caused by economic necessity, and not a means of dealing with mediocrity.

“I fear that redundancies are sometimes viewed as the expedient way of dealing with an issue, and I think the human cost can be enormous,” he says. “It leaves a lot of scar tissue, so you have to be honest with yourself: is the redundancy a result of mediocrity, and do you therefore need to address the issue of mediocrity, or is it something that you couldn’t avoid?”

Smith and Hodson have obviously handled such challenges well enough to gain the respect of their peers, as well as their staff. There is no doubting the difficulties of being a successful leader in the current economy, which perhaps makes the prize more meaningful than ever.

Smith and Hodson will be watching closely, along with the rest of the industry, to see who takes this year’s accolades.

Insurance Times created the Insurer and Broker Chief Execs’ Chief Exec awards last year to highlight the absolute importance of leadership. Not just as a cluster of theoretical attributes, but as a critical, measurable factor in business success. The other ingredient we added, deliberately, was not to put ourselves in the judging seat, but to ask the industry’s chief executives themselves.

Over the next few weeks, Insurance Times publishing director Shân Millie will be contacting chief executives at the UK’s top brokers and insurers, inviting them to consider their choice of ‘first among equals’ and then cast their vote through an anonymised process overseen by national polling organisation YouGov.

Our industry leaders need to manage sometimes competing expectations from their many constituencies and to deal with the slings and arrows of outrageous (economic and regulatory) fortune. They must have the ability to lead, inspire and motivate - and to move quickly, with the right communication.