This year’s finalists for the Insurance Times Claims Excellence Awards 2019 have been revealed.

After a record number of entries, there are a staggering 60 nominees across 14 awards. Plus we have the award for the ’Claims Champion of the Year,’ which will be announced later.

Also, this year we have the ’Claims Newsmaker of the Year,’ which is voted by you!

The five stories chosen are:

To vote for your winner, click here! You have until 30 April to register your vote.

The awards will be handed out at the ceremony, which returns to the Royal Garden Hotel in London’s swanky district of Kensington on 23 May. Tables are still available so head over to the website to book your table.

Judging will take place on 1 May 2019, where high profile judges from the industry will decide who the best of the best are, and who deserves to take home the coveted prizes.

Full list of nominees and finalists below. Did you make the cut?

Claims Product Solution of the Year – Direct to market

Claims Team of the Year

Commercial Lines Insurer of the Year

Fraud Prevention Solution of the Year

Personal Lines Insurer of the Year 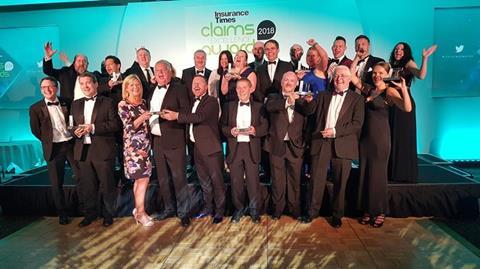