AIG is back, says UK boss Nicolas Aubert, but there’s still work to be done to keep it on the upward march 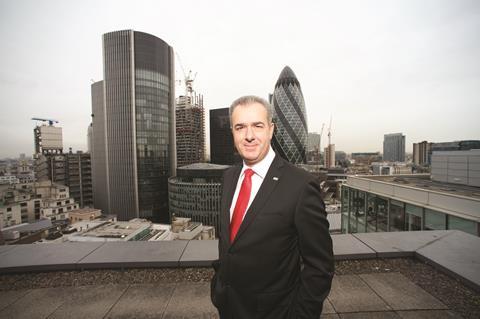 The day was 16 September 2008 and the phones were buzzing at the Insurance Times offices. Fear had gripped the UK insurance broking community. Was AIG really going to collapse?

It was an historic moment in modern UK insurance broking history, comparable perhaps only to the collapse of Independent Insurance and, then later, Quinn.

But unlike Independent and Quinn, brokers desperately wanted AIG to survive. Not just for the sake of their clients, but for the fact that AIG was, barring the turmoil in its financial products unit, an excellent general insurance company in its chosen fields. If AIG failed, it would leave ACE and Zurich as the dominant players.

The confidence of the company is there for all to see: at the end of last year, it rebranded back to AIG, following an interlude with the name Chartis.

Aubert says: “Anything that is not killing you is making you stronger. We are not just going to take the AIG sign from the basement, clean it and put it on the building from two or three or years ago.

“The new logo demonstrates that it is a new AIG, an AIG that is leveraging on its past experience, and has come back as a company that has learned from its experience and is even stronger.”

The return to AIG is symbolic, and there has been a carefully planned strategy leading up to it to strengthen the company.

Some tough decisions have been made around re-underwriting the company’s book to cleanse it of unprofitable business. Solicitors’ professional indemnity, construction and public sector have all been cleaned up.

Aubert says: “We have not been pulling out capacity in any line. What we have been doing is selecting out within our portfolio some products or segments, or some clients to be honest, that were not matching our profitability and sustainability expectations.

“We have been doing that consistently over the past two-and-a-half years, more or less. We finished this process at the beginning of 2012 and that was one of our most important objectives. It ensures that we have a very sound base and platform to leverage for the future.”

There’s been a creative push to ensure that ideas and experiences are exchanged between the UK - AIG’s third largest operation behind the US and Japan - and the rest of Europe.

The framework for this has been provided by the decision to turn AIG UK into AIG Europe and then roll all of the other 26 countries across Europe into this new legal entity.

The new logo demonstrates that it is a new AIG, an AIG which is leveraging on its past experience, and is even stronger”

One example of this in practice is that the UK is now a centre of marketing expertise that will service other operations in Europe. The UK, as one of the maturest insurance markets in the world, will also be expected to pass on underwriting advice to its European counterparts.

It’s all a carefully orchestrated strategy, in which Aubert plays conductor.

Aubert has insurance in his blood. He was a lawyer, educated in insurance and business, before becoming a property underwriter.

His grasp of the detail, team-working ability and strategic nous propelled him quickly to the top of his game and, by his thirties, he was in a number of senior management positions.

Aubert went from heading up Cigna’s property/casualty operation, to deputy manager of AIG France, which he helped grow from $500m (£310m) to $1bn premium and ran negotiations to reorganise the European operations. He then headed AIG’s southern European operations and, 18 months ago, become the UK boss.

He comes across a big-picture thinker, but also with a keen grasp of the detail, spoken in fluent English, but with a distinctive French accent.

Looking to the future, Aubert says the London market will be a growth driver for AIG, and sees global broker partners such as Aon playing a bigger role with the insurer.

“We are going to be playing much more in the international part of the business, in the London and Lloyd’s market part of the business. Multi­national has always been our core business but we believe that we can use our expertise, not only to work well within the retail spectrum, but also to be playing more in the wholesale. That is going to be an important development in the coming years. It is 20% of our international business, so it means it can be much more,” he said.

As for UK growth opportunities, Aubert remains cautious about expanding too rapidly in the highly competitive small to medium-sized enterprises market, although its strong liability sweet spots such as professional indemnity and directors’ and officers’ liability will continue to be important.

AIG will also continue to focus on its core strengths with the large corporates, targeting new products to help cope with emerging risks, such as cyber and environmental threats.

Aubert says: “We are binding more business than the previous months, which is giving a very good indication that AIG’s comeback is a real one.”

The AIG of today has more humility than the one that existed before the financial crisis; it is hungry to prove itself once again, and for brokers that can only be a good thing.

● Expand its presence in the London market

● Step up its footprint in SME when the time is right