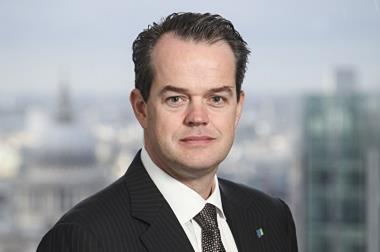 Despite a £132m claims bill from the December storms, the insurer’s UK general insurance (GI) COR only rose by 0.3 percentage points from the 94.8% reported in 2014.

Typically Aviva will defend its customers against spurious claims from third parties. And where the claimant is found by the judge to have exaggerated their claim, in most cases Aviva is able to recover its costs.

Tulloch added: “We have also focused on the fundamentals of underwriting and indemnity management. That keeps COR in check.

“We lowered our expenses by 8% and managed the allocation of capital. In absorbing the £132m, which was about 3 points [on the COR], the business was still able to deliver satisfactory results at 95.1%.”

Commercial property and liability COR rose the most after the storms, going up up by 4 percentage points to 93.9% in 2015.

Home fared much better as its COR improved by 2.5 percentage points to 90.6%. In 2015, Aviva also reduced its home volume by getting rid of old and unprofitable home deals.

The reduction in operating expenses in 2015 was driven by a reduction in staff and continued focus on cost control.

But Tulloch stressed that, following the new deals signed with TSB and HomeServe, there were no more staff cuts planned.

He said: “HomeServe and TSB have about six million customers between them.

“With HomeServe coming online in the third week of December and TSB in the late second quarter, my hope would be that we have a full complement of staff and capabilities and there are no planned cuts.”

Holmes said his priority will be to build on the the UK GI business’s success and strengthen relationships with brokers.