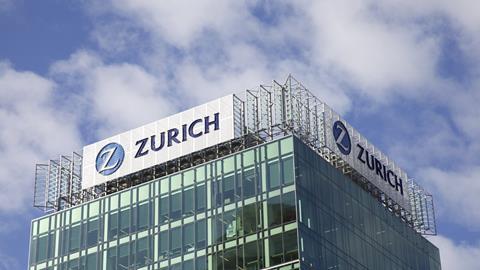 Zurich’s UK premium declined in the first quarter of this year.

Zurich said: ”In EMEA, gross written premiums increased 9% in U.S. dollar terms and declined by 2% on a like-for-like basis, with growth in the Switzerland commercial business offset by reductions in Germany and the UK.

”Gross written premiums for North America were down 5% compared to the prior year period. In line with group’s strategy, this was mainly driven by planned reductions in less profitable lines.”

Overall, the EMEA book was up 9% to $5.3bn - but this was because of positive currency movements. There was a 2% decline on a like-for-like basis.

Total property and casualty was up 5% to $9.3bn, but again, this was because of positive currency movements. Like-for-like it was down 1%.

Zurich group chief executive Mario Greco is trying to flush out unwanted business and tighten up on underwriting, meaning the premium falls were part of a planned reduction.

Greco is also slashing costs, and has stressed he is well on the way to meeting targets.

The resutls were announced shortly after Zurich UK revealed a major shake up in the UK.

While Zurich’s UK premium is in decline, AXA is growing in the UK following significant rate rises, especially in commercial renewals.