The insurer also revealed that it expected losses incurred on its travel business to total £44m in excess of normal losses, equating to a £25m additional net loss after reinsurance recoveries of an estimated £18.5m.

In addition to this increase in claims, the insurer announced it was funding £70m of additional business initiatives aimed at reducing the impact of the pandemic on customers and its staff.

This includes supporting customers in financial difficulty, pausing all redundancies until at least the autumn and providing all NHS workers with free breakdown services.

The insurer is also offering premium refunds to motor insurance customers who wish to reduce their annual mileage or cancel foreign use, as well as refunding premiums for annual-trip travel insurance on a pro-rata basis and waiving cancellation fees if people have lost their job or seen reduced hours.

DLG chief executive Penny James said she was pleased that the insurer had been able to move so fast in response to the crisis.

“In these difficult times our focus has been to support our customers, protect our people and do what we can to help the communities we serve,” she said. “I am grateful to the team for their fantastic response, which enabled us to move quickly to home working for almost all our people, except a limited number who are repairing cars for those with essential travel needs.

“We expect to incur £70 million across a range of measures to offer additional value to our customers with particular focus for those in financial difficulty, to give our people job security and to work with local authorities and charities to target funding towards those supporting the most vulnerable.”

Meanwhile, DLG announced that gross written premium (GWP) had increased by 4.7% across the first three months of 2020 to £789.6m, up from £753.9m for the same period in the previous year. 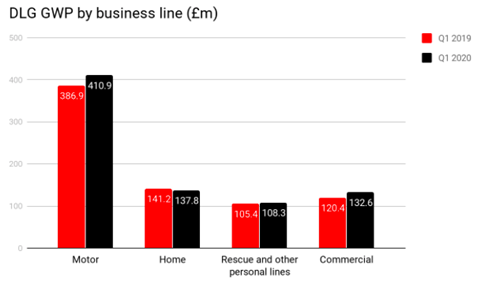 Despite the difficulties facing insurers across the UK, James said the business remained in a strong position.

“We are a strong business with a clear strategy and operational momentum,” she said. “We’ve traded well during Q1 and continue to make progress on our strategic transformation. Our solvency position is strong, partly as a result of the difficult decision to cancel our final dividend for 2019 and also because of our resilient business model.

“Acknowledging the importance of dividends to shareholders, we will review our dividend position alongside our half year results and on an ongoing basis once it is possible to have a better understanding of the impact of Covid-19.”

DLG also announced that as a result of regulatory guidance and the increased uncertainty surrounding Covid-19, the board would no longer be recommending the final dividend for the year ended 31 December 2019.

The insurer said it intends to review the dividend position alongside the half year results and then on an ongoing basis once it is possible to have a better understanding of the impacts of Covid-19.

DLG said it still remained committed to “a targeted combined operating ratio of 93% to 95% normalised for weather in 2021 and over the medium term, and on improving the current-year contribution to operating profit to at least 50% by 2021”.

It did, however, recognise that “these will inevitably depend on the duration and uncertainties of the Covid-19 pandemic, and the pace of economic recovery and consequential impact on customer behaviour”, and admitted that it “may not achieve the target of reducing operating expenses by £50 million by 2021”.

The insurer also announced that executive directors will not be considered for any bonus for 2020 until dividends for ordinary shareholders resume. In addition, chief executive James has chosen to donate her 2020 salary increase to the charity Fareshare.