Haste, who has previously been chief executive of RSA Group, AXA UK and Sun Life, holds a number of non-executive roles across a variety of industries, serving as a chairman, deputy chair, board-level committee chair and senior independent director at a range of high-profile and regulated organisations.

This includes his role as the senior independent deputy chairman of Lloyds of London where he chairs its Remuneration Committee, Investment Committee, Technology and Transformation Committee, and Capacity Transfer Panel. He is also a member of Lloyd’s Nominations and Governance Committee.

Haste said of his appointment:  “I’m delighted to become chairman and look forward to helping steer the company through what is a very important period for esure and for the broader insurance industry.

“This is a great business, with a strong management team and an exciting plan to deliver growth in the future. I would like to thank Sir Peter who has an incredible track record as an entrepreneur and founded such a great company.”

Wood founded the insurer in 1999, and his decision to step down from his role as chairman comes as the company finishes its transition into the private sector following its acquisition by Bain Capital.

Wood said: “Having founded seven insurers in the UK, the US and Spain, it has been a particular privilege to have founded and guided esure over the past 20 years, creating a great company that I hope and believe will thrive under its new ownership.

“Following the change in ownership and establishment of a permanent chief executive in David McMillan, I’ve decided that now is the right time for me to hand over the chairmanship and scale back my responsibilities within esure, allowing me more time to spend on my other interests including GoCompare, Pikl and my property interests. I still retain a shareholding in the company and continue to be available to Andy and David if needed.”

Wood added: “Andy has had a successful executive and non-executive career and I am pleased the Board has selected such a strong candidate to lead esure through its next era of development. I wish the Board, David and all of my friends and colleagues at esure the very best for the future.”

Bain Capital’s Luca Bassi said: “I would like to thank Sir Peter for his central role in the development of the company since its inception in 2000. Sir Peter has worked with Bain in close partnership since our investment in 2018. Peter remains an important shareholder in esure and we look forward to his continued support as we continue to grow the business that he and his team built.

“Looking to the future, we are delighted to welcome Andy to esure. He brings an outstanding track record and unparalleled expertise in the insurance space that will support David and esure as we enter the next phase of strategic development.” 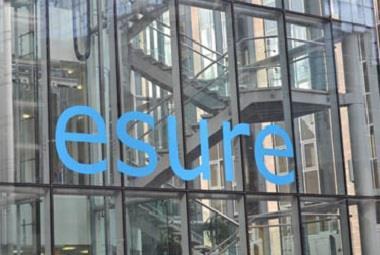