Vehicle mileage dropped by 27% during the Covid-19 pandemic, which has put pressure on insurers to reduce premiums as a result. Now, the insurance industry “should immediately make good [on] its promise of cutting average premiums by £35 in return for the [whiplash reform] changes”, according to Matthew Maxwell Scott, executive director of the Association of Consumer Support Organisations (ACSO).

According to the UK government’s latest Provisional Road Traffic Estimates, Great Britain report (published 8 July 2021), statistics show that the drop in vehicle mileage between April 2020 to March 2021 is the largest fall since the quarterly records started in 1994.

Car traffic decreased by 31% to 189.1 billion vehicle miles over the reporting period, in addition to van and lorry traffic decreasing by 14.2% and 6.8% respectively.

The figures come at the same time as the publication of the latest Compensation Recovery Unit (CRU) injury claims data statistics for the period between April 2021 and June 2021 - this revealed that road traffic accident (RTA) injury claims increased by just under 7,000 claims compared to the same period last year.

However, if claims continue at the current rate, RTA injury claims in 2021 will be sharply down against the long-term average due to the unprecedented drop in motor claims during the height of the pandemic in 2020 - this saw claims fall below 500,000 for the first time, explained Maxwell Scott.

“While we wouldn’t expect premium prices to fall exactly in line with road use or claims numbers, the huge discrepancy means insurers are profiting from the pandemic,” he said.

Considering pricing, stats from the ABI’s Motor Premium Tracker found that while car drivers paid slightly less for their motor insurance over the pandemic period, the average price of cover fell by only 7% - to £436 - for a comprehensive motor policy. 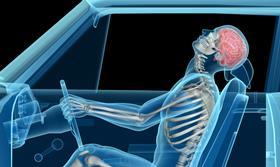 Meanwhile, van insurance fell by just 2%, resulting in an average premium of £1,055.

Maxwell Scott continued: “We don’t think there is any justification for insurers to ramp up prices. So far, only Admiral has done the right thing and returned any premium to policyholders.

“Now the government data [has] laid bare the huge drop in vehicle use last year, as well as in the number of injury claims, we urge other insurers to follow Admiral’s lead, cut the cost of car and van insurance for UK motorists and treat their customers fairly.

“One of the excuses for high premiums trotted out in the past was the cost of minor injury claims. With the government’s whiplash reforms now up and running and claims numbers falling, the insurance industry should immediately make good its promise of cutting average premiums by £35 in return for the changes.

“With the insurance industry’s reputation damaged further by the business interruption insurance scandal, the last thing it needs is to be seen to hike prices when consumers have been using their vehicles so much less – yet that is exactly what could happen.

“As the government is encouraging people to continue working from home if they can, road use is unlikely to return to pre-pandemic levels any time soon.

“Premiums should be coming down to reflect this.”

The latest CRU data, obtained by ACSO via a Freedom of Information (FOI) request, also showed further falls in employers’ and public liability claims. Subsequently, Maxwell Scott added: “The reductions mean there is no need for the government to change the rules for these types of claims.

“Further reform is unnecessary with claims falling across the board.” 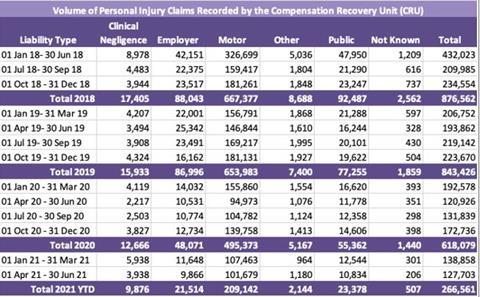