Financial ratings agency Moody’s has predicted “further challenges” for the UK motor market after figures released by the ABI revealed a 1% drop in premiums over the course of 2019.

The ABI’s latest Motor Insurance Premium Tracker revealed that, while the average motor premium paid in the UK during Q4 2019 rose 3% compared with Q3, prices compared to 2018 had fallen by 1%.

This means that the average annual comprehensive motor premium paid over 2019 as a whole was £471, down from £477 in 2018, despite estimated claims inflation of between 5% and 8%.

A Moody’s report commenting on the figures said that “this further challenges the profitability of UK motor insurers” with higher claims outweighing increases in premiums. 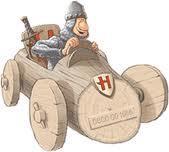 It’s been troubling times for Hastings – profits likely down 42% from last year, a lower dividend, the share price falling 8% – all caused by falling claims

”Given highly competitive conditions in the market, we believe only a gradual price adjustment will be possible.

The rating agency also expects a worsening of insurers’ profitability as we move through 2020, a position that will only be exacerbated by the latest revision to the Ogden discount rate.

“The lag between price increases and claims inflation will exacerbate pressure on some insurers from a lower-than-expected increase in the discount rate that UK courts use to calculate lump sum compensation payments to personal injury victims (known as the Ogden rate) in July 2019,”

”Moody’s said in the report. “This will negatively affect the industry’s long-term earnings, unless insurers are able to raise prices sufficiently to offset the additional increase in claims costs.

“The revision of the Ogden rate has also affected reinsurers with exposure to the UK motor liability sector and, according to Willis Re, has led to market-wide excess of loss repricing, thereby increasing UK motor insurers’ costs.