Mergers and acquisitions (M&A) in Europe continue to be driven by a trend for smaller investments and the need to access new technologies.

For example, in 2019 this included, MS Amlin’s purchase of an undisclosed stake in Envelop Risk – a Bermudian start up that provides artificial intelligence-driven cyber modelling, as well as Phoenix Group merging with Telesto Digital – a platform development company focusing on digital engagement in the health and wellness sector.

Meanwhile 2019 saw 88 transactions completed in the first six months as deals that had been put on hold due to Brexit were finally pulled over the line.

The UK’s drawn out departure from the EU had an impact on insurers in the region and beyond – both operationally and consequently on their appetite for M&A.

The second half of the year saw 67 transactions as activity dropped back falling to a level that was more in line with recent years.

This is according to the second part of Clyde & Co’s ‘Insurance Growth Report 2020 – Charting the Ebb and Flow of Insurance M&A’.

Paris-based partner at Clyde & Co Yannis Samothrakis, said: “Insurers have been cooperating to various degrees with tech start-ups but now that many have a more proven track record and a few have achieved some level of maturity in, what is a highly regulated market, interest is increasing.

“However, insurtech tie-ups of all kinds take a while to get up and running. It is vital that they are structured correctly, and this requires agreement over a range of factors including pricing of products, policy documentation and claims handling.”

In the UK – historically Europe’s most active market for M&A, deal volume dipped to 17 compared to 21 the previous year, with France overtaking the UK last year in deal volume.

Bigger deals continued to hit the headlines such as AXA’s continued restructuring with the sale of its units in central and eastern Europe to Uniqa of Austria and Covea’s $9.0bn move for PartnerRe – the majority of transactions in the country have been much smaller, as elsewhere in the region.

Technology continued to move up the agenda, Groupama took a stake in Objetdomotique – a company offering smart home automation that specialises in the field of e-health and safety while Paris-based Alan – a purely digital health insurer – secured $45m from a US investor group.

Germany mirrored the same trends as France, despite its largest deal being the $2.2bn move by Viridium Gruppe to acquire a majority stake (90%) in Generali Leben M&A activity has been muted due to stock market volatility, rising populism and political uncertainty impacting dealmaker confidence.

Therefore, with mounting pressure for large insurers, Clyde & Co expect greater focus on acquiring smaller books of business that align with strategic investment as well as a continued emphasis on deals that deliver innovation.

It also sees further consolidation in the broking market with smaller intermediaries and books being acquired as well as those with international reach.

The UK’s delayed departure from the EU has impact M&A, but there have been a number of popular destinations that insurers have targeted to keep their business and client interest afloat, which includes business from a regulatory perspective.

For example, Lloyd’s of London has set up a European platform in Brussels, AIG in Luxembourg, Beazley in Dublin and Markel in Munich.

As well as newly formed subsidiaries across the market beginning to renew 2020 business so that the insurance industry is well prepared post-Brexit, despite reaching this point being a lengthy and complicated journey.

And Brexit might give rise to a further flurry of deal, especially in the legacy market.

Existing passporting arrangements allow UK-based firms to access and offer services throughout the European Economic Area (EEA), and vice versa without the need for separate authorisation in each jurisdiction.

Firms in the EEA are authorised to conduct regulated activities in the UK insurance market at present and will be able to do so for a maximum of three years while they seek UK authorisation under the temporary permission regime offered by the UK regulator.

But there are reciprocal arrangements in place from the EU, which means that UK insurance firms currently accessing the EEA market though a passport could lose the authorisation to do so. Firms are aware of this and have been planning for the worst-case scenario – a hard Brexit that would mean the UK leaves without a trade agreement in place.

For those that wish to continue operating in the EU, this has meant establishing a presence in one of the EU 27 nations. Most of the larger businesses have opted to do this via the setting up of a subsidiary rather than through an acquisition.

However, at the end of the Brexit transition period – slated for 31 December – these arrangements could cease.

But some smaller operators in the UK will look at the cost of setting up operations in the EU and decide to end their overseas operations and sell books of business.

At the same time, EU insurers will be considering their structures and where they might exit non-core lines, leading to opportunities for acquirors.

Clyde & Co said that dealmakers are already sensing these opportunities.

For example, European run-off specialist Darag setting up in Britain in 2019 in expectation of Brexit-related deals.

Meanwhile market reports suggest that Fortitude Re – a vehicle set up by AIG with investment from private equity firm Carlyle is also planning to buy or reinsure other closed books and expand into Europe. 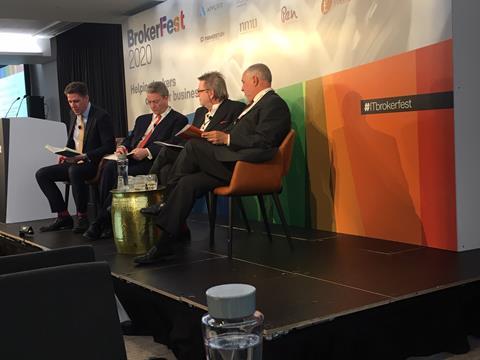