UK set for record-breaking levels of rainfall – Swiss Re

The UK could experience a record-breaking rainfall event every 30 years by the end of the current century, according to a new report published by reinsurance company Swiss Re on 30 March 2022.

Its 2021 Natural Catastrophe sigma report explained that this prediction represents a tenfold increase in this type of rainfall event, excluding the impact of climate change, compared to the prior century. 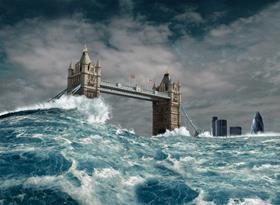 Swiss Re’s report identified the UK as one of the most exposed countries in Europe to flood risk.

Since 1862, six of the 10 wettest years in the UK have occurred since 1998, while the last decade has been 4% wetter on average, according to statistics published by the UK Meteorological Office in July 2021.

In the UK, flooding typically occurs as a result of rivers being unable to carry excessive rain or from melting snow.

The country’s 10 warmest years, meanwhile, have occurred since 2002, Swiss Re reported. As a result, the reinsurer expects more frequent and intense weather extremes as global warming persists.

To combat these weather changes, Swiss Re’s UK and Ireland chief executive Jason Richards said that further actions should be considered to extend the reach of risk transfer solutions and increase the financial resilience of households.

For example, from April 2022, Flood Re will begin working with insurers to cover the cost for homes to be repaired in a more flood resilient way following a flood.

Richards continued: “To strengthen resilience against flood risk, (re)insurers should be giving it the same attention as primary perils, such as hurricanes.

“Key to this will be continuing to embrace the full breadth of available data and new innovations – such as those which simulate for the impact of soil sealing on ground drainage capacity in urban areas – to better understand the different factors that shape present and future risk scenarios.”

Despite its changing weather profile, Swiss Re noted that the UK has the smallest natural catastrophe insurance protection gap (25%) when compared to the other countries included in the report.