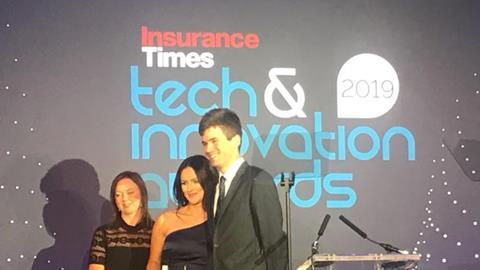 AXA XL bagged one of the biggest award of the night with Hélène Stanway – the firm’s digital leader walking away with Technology Champion of the Year at Insurance Times’s Tech & Innovation Awards last night in Kensington’s Royal Garden Hotel.

Stanway, who has been with AXA XL since August 2016, beat four fellow nominees James Barnard of the Ardonagh Group, Oke Eleazu of Bought by Many, Adam Miller of Markerstudy and Aldo Monteforte at The Floow.

Stanway couldn’t be there on the night as she was away on a business trip, via video message she said thank you that “wow what a night, it feels like I have just won the oscars”. She added that the award was “a really positive step” for AXA XL and a testament to its cooperation. She said she was also very chuffed that AXA XL received a special commendation in the Breakthrough IoT.

The evening was hosted by stand-up comedian and comedy writer for The Last Leg and Fighting Talk – Ivo Graham.

Incubator Insurtech Gateway won Investor/Corporate Innovator of the Year sponsored by Tällt Ventures for an “impressive commitment to early stage funding of start-ups”. Its investments include By Miles and Flood Flash.

Technology as a solution

While former AIG boss Jacqueline McNamee’s insurtech MGA C-Quence walked away with Insurance Start-up in the B2B category, the judges said its entry was “very promising for a start-up” in commercial lines delivering a seamless experience for brokers.

C-Quence said that it didn’t expect it despite being up for two awards. MacNamee said that she was “superproud” as its recognition for what the firm was doing.

Steve Muir, who works in communications and marketing there said: “To have this recognition at the start of our journey is unbelievable. We are just buzzing, what it says is we are quite good at what we are doing.” 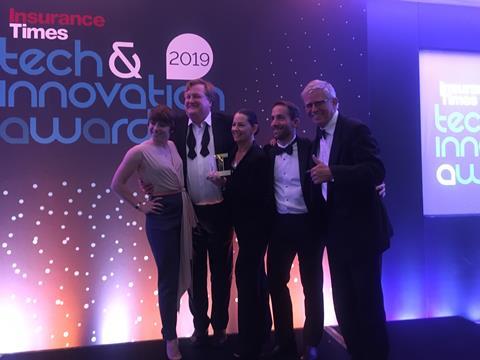 Pikl won nsurance start up B2C overtaking competitors Cignpost Life, HUGHHUB, Tapoly and Urban Jungle. The judges were impressed by the way the it identified how best to serve a market both for today and the future.

Anna Marie-Powell Pikl’s head of marketing collected the award, on hearing the firm’s victory founder and chief executive Louise Birritteri, said: “Pikl are really proud to win the insurance start-up award in the b2c category and want to give thanks for the work the Pikl team and it’s supporters have done to protect people in the sharing economy.”

The startup recently celebrated its launch last week after a substantial funding round from Sir Peter Wood – founder of Direct Line Group and esure.

But it was Avantia that won Technology Innovation of the Year Award, with C-Quence being highly commended. Judges were “extremely impressed” with Avantia’s smart pricing platform.

The Internet of Things Breakthrough Award was awarded to Zurich Municipal and The Innovation Foundry.

for their work with social housing, specifically developing a sensor enabling the early detection of mould or damp in housing association properties, potentially enabling insurance cover for tenants likely to have been rejected in the past.

A Zurich spokesperson told Insurance Times she was “delighted” at the win, adding that it was “great to help housing association tenants improve their lives”.

All the winners and nominees

Best Use of Technology for Customer Experience ***Winner: Neos

Best Use of Technology for Customer Experience – Claims ***Winner: Verisk and The Davies Group

Carrot Insurance scooped the award for Best Customer App against Aviva and so sure. The judges liked the evidence Carrot presented on increasing customer engagement via the app as well as improving underwriting results for insurers

The Floow picked up the Data Analytics Excellence Award after showing the judges “innovative ways to achieve fairer pricing” and working collaboratively with partners to get the right results. Competitors included Aviva Quantum, DWF Law LLP, esure in partnership with Davies Group and Healthy Pets.

The Floow said: ”It”s brilliant, we have a fabulous team. We have pretty well winning awards recently, its all consolidation that we are doing the right thing.”

Applied Systems were the winners of the Best Broker Software Management House Award beating both Acturis and Open GI. The judges liked Applied Systems’ presentation which demonstrated benefits to both the broker and customer.

Xceedance Technology were awarded Partner of the Year – Software Platform for a partnership in high net worth policy management. 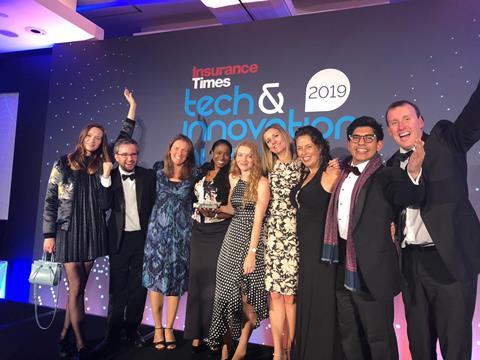 Zurich Municipal and their award

The judges said: “The platform partnership with a wealth management adviser will ultimately allow just 12 insurance professionals to manage up to 60,000 High Net Worth policies a year, covering 250,000 individual risks.”

Commenting on the win, Xceedance head of EMEA Justin Davies said: “We’re delighted to have a partner like [MGA] Archipelago. We couldn’t have asked for a better partner. We’ve learnt from them and I hope they’ve learnt a lot from us. We’ve built something that we think will change the London market.”

Richard Coleman, founder of Archipelago said that the award “validates everything that we knew about the technical excellence Xceedance brings, most importantly as a partner rather than a traditional vendor-supplier relationship.

Best in Digital – Direct to Consumer was awarded to Co-op Insurance over fellow finalists Aviva, AXA, Direct Line and LV=. It used a metric focussed approach benchmarking themselves against competitors to better understand both present and future challenges.

A Co-op spokesperson told Insurance Times: ”We’re very surprised and shocked we’ve won. We’re very honoured. A lot of hard work has gone into this throughout the team. So it means a lot to us. We’re going to celebrate this win as a team.”

However, Neos won Best Use of Technology for Customer Experience over Pluto, Policy Expert, Stanhope Cooper and Trak Global Group. The submission from Neos “ticked all the boxes” needed to be effective in improving real-life customer experience according to the judges.

Allianz’s QuoteSME seized the awards for Best Insurer Extranet, the judges said that the insurer made an effort in improving its underwriting process using technology to direct brokers to the most suitable underwriter, it was up against the likes of Aviva Fast-Trade, Markel and NIG’s TheHub.

And Claim Technology won the award for Technology Innovation of the Year – Service Provider for the use of a chatbot.

Moving on to claims, Sedgwick and Typhoon 8 bagged Best Use of artificial intelligence (AI), with Aqualytics UK being highly commended. The judges liked the “easy to use app” that enabled claims to be settled in one visit and its algorithm dramatically reduced the claims lifecycle.

Verisk and Davies Group won Best Use of Technology for Customer Experience in Claims after the judges witnessed a “great use of tech taking out a lot of the hassle for the customer”.

Whereas the Best Use of AI – Underwriting went to Metswift for its potential “gamechanger for underwriting weather risk”.

Technology Partner of the Year in Underwriting went to SafetyCulture for a mobile first partnership allowing insurers to reduce pre-underwriting visits to just 5% of insured sites, while Mandon Software were highly commended. 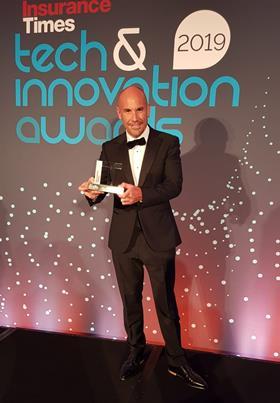 VisionTrack were awarded Technology Partner of the Year in Claims, the firm’s entry “reduced claims frequency by 24%” and claims costs by 18%. Others in the running included AX, Collision Management Systems, eviid and Solera Audatex.

Its managing director, Simon Marsh said he was superproud having doubled his staff base significantly since last year: ”It is fantastic to win an award with Insurance Times, we have evolved”. But it was his team working behind the scenes that he thanked the most. 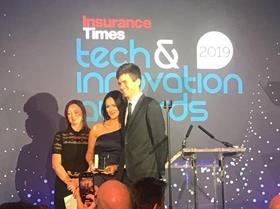 GoCompare picking up its awards

Lastly aggregator GoCompare walked away with an award for Fraud Technology Solution of the Year sponsored by Carpenter’s Group. The judges congratulated the firm given its position in the market and its use of resources to improve the fight against fraud, at no real benefit to themselves.

Fleur Lewis, its head of fraud said: ”Absolutely delighted and proud of this recognition. Thankyou to all the talented teams involved in Featurespace and GoCompare, you simply are best in class.”