Combined Ciara and Dennis claims approach half a billion pounds

Insurance claims in the wake of storms Ciara and Dennis are expected to reach close to half a billion pounds combined.

Latest estimates for the cost of Storm Dennis which battered the UK last weekend alone are expected to be between £175m-£225m, according to PwC.

Dennis has caused significant flooding in parts of west and southern England, with no sign of a let-up in the conveyor belt of turbulent weather afflicting the UK in recent weeks.

The storms have flooded out hundreds of properties and led to several deaths, with several warnings still in place.

Towns and villages along the rivers Wye and Severn were particularly hit by Storm Dennis.

Meanwhile, research from thinktank Bright Blue suggests up to 70,000 homes could be ineligible for insurance cover by Flood Re because they were built after 1 January 2009.

Flood Re was set up in 2015 to provide cover for up to 350,000 properties built on flood plains and every UK insurer must contribute to it. It raises £180m a year which is used to reimburse insurers for valid flood claims.

Bright Blue said that up to 20,000 of these new homes are not protected by flood defences.

Meanwhile, Welsh rugby club Bedwas RFC was forced to seek donations to give it going after its insurance policy did not cover flood damage.

The club’s grounds were devastated after a nearby river flooded its facilities in the wake of Storm Dennis. 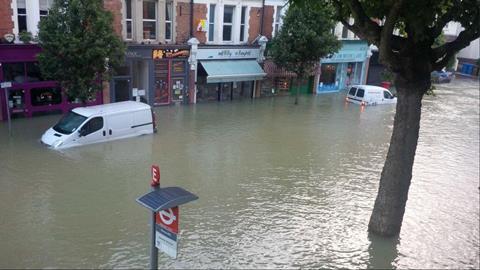