The need for innovation in insurance is vital as the “chronic threat of climate change remains”. 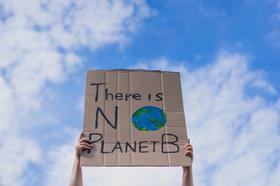 This was the key point MP Alok Sharma, president of the 2021 United Nations Climate Change Conference (COP26), made during his opening address at the Business of Resilience Conference on 21 March 2022, entitled The Need to Deliver on Climate Resilience.

Sharma told delegates: “Extreme weather is unfortunately on the march around the world. The impacts of climate change are coming faster and more fiercely than previously predicted.

“We have seen a big shift to net zero and this shift is absolutely vital because finance ultimately underpins the resilient net zero world we must build. Without finance nothing else is possible.

“Insurance is a part of that picture. The need for insurance products in this sector is vital.”

As an example of the effects of climate change he noted last year’s floods, fires, record-breaking temperatures and Australia recently experiencing a year’s worth of rain in a matter of days.

The MP helped to launch the Race to Resilience Campaign last year, which aimed to bring together businesses and financial institutions with the aim of building resilience for four billion people by 2030 – members have already pledged to build resilience for three billion worldwide.

The campaign defines resilience as a state where people and businesses thrive in spite of climate shocks and stresses, rather than simply surviving them. It has backed this by supporting coastal defences to protect against weather events, for example.

“Insurance is absolutely part of this agenda, communities must be able to protect themselves financially from climate risk,” he added.

He noted some progress in this area, with public and private partnerships being established.

The Institute of Resilience global partnership brings together more than 100 governments, international institutions and private sector firms including the likes of Willis Towers Watson, Axa, and Swiss Re. These combined entities have committed to protect 500 million of the world’s most vulnerable people.

“The UK has played a part; it has been instrumental in ensuring that vulnerable countries have the insurance cover that they need. For example, [it has helped establish] regional risk insurance pools in the Pacific, Caribbean, Africa and Southeast Asia.

“The market has responded by providing hundreds of billions of pounds in risk finance of reinsurance capacity. Much of this, brokered in London, has been boosted by enormous skills.”

He stressed that these developments have demonstrated “real tangible” progress.

Sharma added: “It is worth pointing out that the future of this issue not yet fully written and we do have an element of control.”

For example, he noted that the rise of global temperatures could still be limited, but that “we must act faster to close the gap and ensure that we can catch up”.

He warned: “Ecosystems have been irreversibly damaged – half of humanity is already vulnerable to climate change. The reality is unless we act collectively within our lifetimes the impacts will grow at a force of velocity to terrifying levels.

Drawing on the most recent COP26 in Glasgow last year in November, Sharma said some progress had been made.

He explained: “Now we must deliver urgently on what was promised and build societies and economies that are more resilient to climate change, ultimately that will require every part of society to play its part.

“We need businesses, including financial institutions, to build resilience into their practices to help their companies and the working economy thrive as the climate inevitably changes.”